Fasting is Good for our Body and our Soul 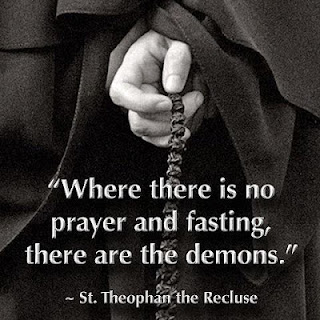 Extra, Extra, read all about it! Fasting lowers our addiction to the passions, inhibits our willingness to sin and helps lower cholesterol.  We know the first two are certainly connected to our Christian understanding of fasting, but the third would seemingly be a new development.  There was a study done on the Greek island of Crete in which 120 Orthodox Christians were followed for one year.  Sixty of the people held strictly to the fasting practices as outlined by the Orthodox Church in the strictest manner and the other sixty did not.  The researchers then measured each of the participants at the beginning and end of each fasting period (this included: the 48 days of Great Lent and Holy Week, the 15 days of the Dormition Fast in August and the 40 days of the Advent Fast).  They recorded their height and weight, their waist and hip size and the level of cholesterol and lipoproteins in a blood sample.

The researchers’ findings could be said to be nothing short of a miracle.  They found that Orthodox Christian fasting (in the sixty who fasted) reduced the levels of total cholesterol in the blood by 9% and the levels of lipoproteins by 12%.  The researchers did add that the numbers did steadily rise again, though not to their original levels when the fasters returned to their normal diet.  This study certainly shows that there is some connection between the health of the soul and the health of the body, at the very least it would declare that a healthy body is an aid to a healthy soul.

First, let us see where the idea of fasting came from? In the Gospel of Matthew we find that Jesus Himself fasted for forty days and forty nights during His personal sojourn into the desert to battle with Satan.  The people of Israel were tested for forty years in the desert and proved themselves to be both disobedient and disloyal to the Lord.  God humbled them by first forcing them to go hungry and then supplying them with manna to help them learn to put their dependence on Him.  The Lord only gave them enough food for that day and whatever was left over vanished.  The people in this way were forced to trust in the obedience of God that He would give them everything they needed, and He did.

If we go back to the Gospel of Matthew we find that Jesus fasts for forty days, but He never proves Himself disloyal to His Father in heaven.  In addition, Holy Scripture shares that “afterward He was hungry” which shows Him to be a Person like you or me.  Jesus fasted to overcome temptation.  This gives us an example of our own power and limitations in the face of many temptations.  The hunger of His Body has no control over Him; rather He is left in complete control of it.  The fact of our Lord’s forty day fast in the desert also sets the standard for our forty days of fasting, which we are now in the midst of, in this Lenten season.

Jesus Himself told His apostles that there are certain spiritual problems which will only be loosed by “prayer and fasting”.  God has given us our lives so that we may come to know Him in an intimate way.  St. Isaac the Syrian wrote: “this life has been given to you for repentance, do not waste it in vain pursuits”.  It would seem to make sense that if there are certain spiritual and physical problems that may only be cured by prayer and fasting in accord with the words of the Lord.  And if in addition, “this life is given to us for repentance” in the words of St. Isaac the Syrian that God has asked us to fast not only to heal our spiritual problems but to make our stay on earth longer and healthier in order to give us more time for repentance.  There is certainly a great connection between the two, the Church Fathers realized long before the study of science would be able to make the connection through experiments.

This fact is witnessed to in the preaching of St. John Chrysostom in the 4th century as he spoke of the medicinal aspect of fasting while supporting the Orthodox Christian understanding of the body and soul being inseparable.  He refers to fasting as the “mother of bodily health”, and says, “If you do not believe me, then ask the doctors about this and they will tell you better.”  He then goes on to say, “Pains of the legs and headache and apoplexy and tuberculosis and water retention and inflammations and abscesses and many other countless illnesses come from luxurious diets and over-eating. When the body becomes sluggish and weak, the soul undergoes damage as well. This is because the activities of the soul are determined by the conditions of the body”.

The goal of our fasting, during the prescribed fasting seasons of the Church, should never be to lose weight or abused as some sort of a new “Orthodox Christian” diet.  In other words, we shouldn’t choose to follow the fasting guidelines only with our figures in mind as that would be a vain pursuit, in the words of St. Isaac the Syrian.  The goal of our fasting is to reconcile us with God, to do just as He did on earth, in an attempt; in the words of His All-Holiness, Patriarch Bartholomew “to reject the split which exists between heaven and earth”.  His All-Holiness adds that perhaps fasting “in itself is an unconscious effort to reconcile one half of the year with the other, secular time with the sacred time of eternity”.  It is this last statement from His All-Holiness which ties together both the physical and spiritual benefits of fasting.  We mentioned quickly in the experiment we spoke of in the beginning that the cholesterol and lipoprotein percentages did increase in Orthodox Christians when they returned to their regular diet following the fasting seasons, but not to their original levels.  It is this beautiful balance between fasting and feasting which works to maintain both our physical and spiritual health.

This shows that when we fast we are never attempting to destroy our bodies, but we are simply trying to control them, to harness the energy that God shares with us in a way which honors our bodies as “temples of God” and directs this honor at Him, Who gives all things.  Our whole person is refined in this way, both inside and out, physically and spiritually, in soul and body.  There is never just one reason for the things that God expects of us, the reasons are many and varying, the results are always a deeper connection with Him in the Kingdom of Heaven.