Metropolitan Nicholas, the former ruling Hierarch of the American Carpatho-Russian Orthodox Diocese, was born on February 23, 1936. The son of the late Anna (Totin) and Andrew Smisko, he was a priestly vocation from Saint John the Baptist Church, Perth Amboy, New Jersey. Throughout his youth, he served as an altar boy and in the choir and learned the Carpatho-Russian Plain Chant.

After graduating from Perth Amboy High School, he entered Christ the Saviour Seminary in Johnstown, Pennsylvania to study for the Holy Priesthood. Upon graduation, he was ordained on January 11, 1959 by Bishop Orestes in Perth Amboy. His first pastorate was at Saints Peter and Paul Church in Windber, Pennsylvania, where he served until 1962.

A new phase of his life began when he embarked on a year's study at the renowned Patriarchal Theological Academy at Halki, Constantinople. During his stay in the city, the young priest was assigned by the late Ecumenical Patriarch Athenagoras to serve the spiritual needs of the large Slavic Orthodox community in the Galata section of Istanbul. He also traveled extensively throughout Europe and the Middle East, visiting the sacred sites of the Holy Land and living for a time on Mount Athos, the ancient monastic center of the Orthodox Church.

Upon his return to the United States, he resumed his studies at the University of Youngstown, Ohio, and the University of Pittsburgh at Johnstown. He holds the Bachelor of Arts, Bachelor of Theology and the Licentiate of Theology degree. In 1963, Metropolitan Orestes assigned him as Prefect of Discipline at Christ the Saviour Seminary, a member of the faculty, and an assistant at Christ the Saviour Cathedral. In 1965, he assumed the administrative duties of pastor at Saints Peter and Paul Church in Homer City, and in 1971, was named pastor of Saint Michael's Church in Clymer. A year later, he assumed the pastorate of Saint Nicholas Church in New York City.

Acknowledgement of Fr. Nicholas' labors for Christ and His Church came in 1976 when Bishop John announced his elevation to the rank of Archimandrite at the XI Diocesan Council in Chicago. The investiture ceremonies were held in Saint Nicholas Church, New York, on January 23, 1977. When the Monastery of the Annunciation was established in Tuxedo Park, New York, in the spring of 1979, Bishop John appointed him as the community's first Abbot.   He made his profession of vows during the dedication of the Monastery on September 16, 1979.

Three years later, Archimandrite Nicholas was elected Titular Bishop of Amissos and Auxiliary Bishop of the Ukrainian Orthodox Diocese of the Ecumenical Patriarchate by the Holy Synod of Constantinople. He was subsequently elevated to the episcopacy on March 13, 1983 at Saint Mary's Church in Allentown, Pennsylvania. The presiding prelate and consecrator was His Eminence, Archbishop Iakovos, primate of the Greek Orthodox Archdiocese and Exarch of the Ecumenical Throne in the Western Hemisphere. Co-consecrators were His Eminence, Metropolitan Andrew of the Ukrainian Orthodox Church, His Grace, Bishop Philotheos of Meloa and His Excellency, Bishop John.

Following the death of Bishop John in September of 1984, Bishop Nicholas was chosen as the third ruling hierarch of the Carpatho-Russian Diocese at a special Clergy Council in Johnstown on November 25, 1984. Confirmed by the Holy Synod of the Ecumenical Throne, he was solemnly enthroned in Christ the Saviour Cathedral by His Eminence, Archbishop lakovos on April 19, 1985.

The new Bishop gave immediate attention to liturgical matters. He authorized the Liturgical Commission to translate additional services into English. Resulting from their work was the new Diocesan Pew Book, Holy Week and Resurrection Matins Service Book, a Christmas and Theophany Complines Book, as well as an Altar Liturgical text for the clergy.

His Eminence has headed several pilgrimages overseas. In 1986, he traveled with some 50 pilgrims to Constantinople where he conferred with His All-Holiness, Ecumenical Patriarch Dimitrios I, and also to the Holy Land. The following year, he led two pilgrimages to reverence the Weeping Icon of Our Lady of Chicago and, in 1988, he twice journeyed to Russia and Czechoslovakia for the Millennium Celebration.

In 1988, Metropolitan Nicholas presided at the festivities celebrating the Golden Jubilee of the Diocese. Two years later, a similar celebration marked the 50th Anniversary of Christ the Saviour Seminary.  In 1985, His Eminence represented the Patriarch and the Standing Conference of the Canonical Orthodox Bishops of the Americas (SCOBA) of which he is a member and its treasurer, visiting all four Dioceses of the Orthodox Church in Czechoslovakia, seeing firsthand the persecution it was suffering.

In July of 1990, he, along with Metropolitan Maximos of Pittsburgh, Pennsylvania had the honor of hosting His All-Holiness, Ecumenical Patriarch Dimitrios in Johnstown, with impressive services at the Cambria County War Memorial and a visit by the ranking prelate of World Orthodoxy to the Carpatho-Russian Cathedral, Seminary and Administrative Offices. Metropolitan Nicholas represented the Diocese at the funeral services of the late Patriarch Dimitrios on October 2, 1991. He again represented the Diocese at the enthronement of His All-Holiness, Bartholomew, as new Ecumenical Patriarch in 1991.

In 1992, Metropolitan Nicholas initiated HARVEST 2000, a Diocesan plan for missions, renewal and evangelization. This effort resulted in parish growth and renewal, several new parishes were received into the Diocese and missions were established in Florida, Georgia, Indiana, Illinois, Maryland, North Carolina, Virginia and Ontario, Canada. He also participated in a special Synod of Orthodox Bishops, convened by Ecumenical Patriarch Bartholomew in Constantinople. While in Europe, Metropolitan Nicholas also traveled to Aegina, Greece, where he was given relics of our Holy Father, Saint Nectarios, the miracle-healer of cancer patients, as well as oils from his tomb, which he has shared with all of the Diocesan parishes.

Metropolitan Nicholas has spearheaded the continued development of Camp Nazareth with the construction of a staff lodge and additional cabins for campers. He also had the vision to build an "Old Country Church" at the camp which was consecrated in August of 2003. Its patrons are the evangelizers of the Slavs, Saints Cyril and Methodius.    Under his leadership, a new Chancery for the Diocese has been constructed, adjoining the present Episcopal Residence. Ground was broken for the edifice in June 1997 by His Eminence, Archbishop Spyridon, while the cornerstone was dedicated by His All-Holiness, Ecumenical Patriarch Bartholomew during his historic visit to the Diocese on November 16, 1997.

In September of 2005, a new diocesan-wide youth ministry was established by Metropolitan Nicholas to more effectively meet the spiritual needs of our diocesan youth. Known as the Diocesan Apostolate for Youth,  this apostolic ministry has labored for the strengthening and evangelization of the youth of  the  Diocese and the establishment of a Christian witness for any youth seeking a relationship with Christ. 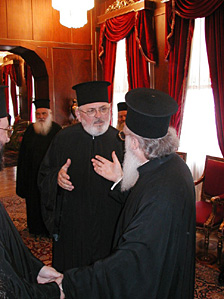 His Eminence has participated in the biennial Synod of Bishops Conference at the Ecumenical Patriarchate since its inception, and he was the Patriarchal representative to the Synod of American Roman Catholic Bishops in Rome in December of 1997.

His Eminence was a member of the Standing Conference of the Canonical Orthodox Bishops in the Americas and served as its treasurer, member or the Orthodox/Catholic Bishops' Dialogue and as Episcopal Moderator of the Planning and Study Commission. For many years he was a member of the Halki Alumni Association.

In August of 2008 His Eminence was invited by Patriarch Bartholomew to the 1020th Anniversary of the Orthodox Christianization of Kiev, commemorating the establishment of the Metropolitinate of Kiev, document given by the late Patriarch Jeremiah.

In May of 2010, His Eminence participated in the first Episcopal Assembly of Canonical Orthodox Hierarchs in North and Central America  in New York City. In January of  2011, he was named chairman of the Committee For Theological Education. 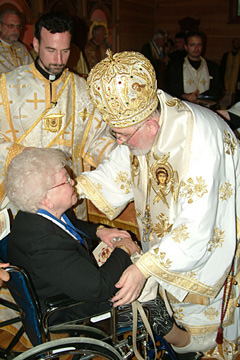 In March of 2008, His Eminence, Metropolitan Nicholas observed his Twenty-Fifth Anniversary of  consecration to the Holy Episcopacy and in January of 2009 the Golden Jubilee of his Ordination to the Holy Priesthood. Over his many years of service to Christ and His Holy Church, His Eminence proved to be a worthy laborer in the Vineyard of the Lord.  His Eminence was noted for his love for his flock and the liturgical services of the Church, and his devotion to the Mother Church, the Ecumenical Patriarchate. He was well-respected in Orthodox and Ecumenical circles as being a promoter of  peace and mutual understanding amongst all Christ-loving people.  True to his patron Saint, Nicholas the wonderworker, His Eminence was perhaps best known and respected  for his pastoral sensitivity, generosity of  spirit and compassion for the sick and suffering and the less fortunate.

His Eminence passed to life eternal on Sunday March 13, 2011 on the 28th Anniversary of Consecration to the Episcopacy.  His funeral took place at Christ the Saviour Cathedral in Johnstown on Friday March 18, 2011 with the burial taking place at  St. John the Baptist Parish Cemetery in Perth Amboy, NJ on Monday March 21, 2011.

Metropolitan Nicholas was the recipient of the Saints Cyril and Methodius Award, given by the Orthodox Church of Czechoslovakia through His Eminence, Metropolitan Dorothej of Prague.

For service to the Serbian Orthodox Church in the United States as well as abroad, Patriarch Pavel awarded His Eminence the prized Saint Sava Award.

He delivered the 1998 commencement address at Hellenic College and Holy Cross School of Theology, at which time he was presented an honorary Doctor of Divinity degree.