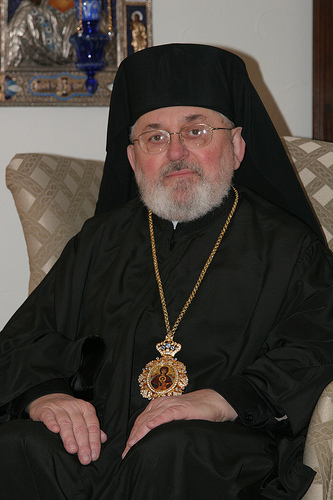 Metropolitan Nicholas, the former ruling Hierarch of the American Carpatho-Russian Orthodox Diocese, was born on February 23, 1936. The son of the late Anna (Totin) and Andrew Smisko, he was a priestly vocation from Saint John the Baptist Church, Perth Amboy, New Jersey. Throughout his youth, he served as an altar boy and in the choir and learned the Carpatho-Russian Plain Chant. Read Full Text...

Metropolitan Nicholas is the recipient of the Saints Cyril and Methodius Award, given by the Orthodox Church of Czechoslovakia through His Eminence, Metropolitan Dorothej of Prague.

For service to the Serbian Orthodox Church in the United States as well as abroad, Patriarch Pavel awarded His Eminence the prized Saint Sava Award.

He delivered the 1998 commencement address at Hellenic College and Holy Cross School of Theology, at which time he was presented an honorary Doctor of Divinity degree.

JOHNSTOWN, PA - Metropolitan Nicholas, 75, spiritual leader of the American Carpatho-Russian Orthodox Diocese of the U.S.A., reposed in the Lord today, March, 13, 2011 after waging a courageous battle with cancer... Full Text

View Sermons, Messages
and Other Multi-Media

Photo Galleries Of
The Life , Pastoral
Ministry and Travels
Of Metropolitan Nicholas