St Sophia And Her Three Daughters: Fath, Hope and Love 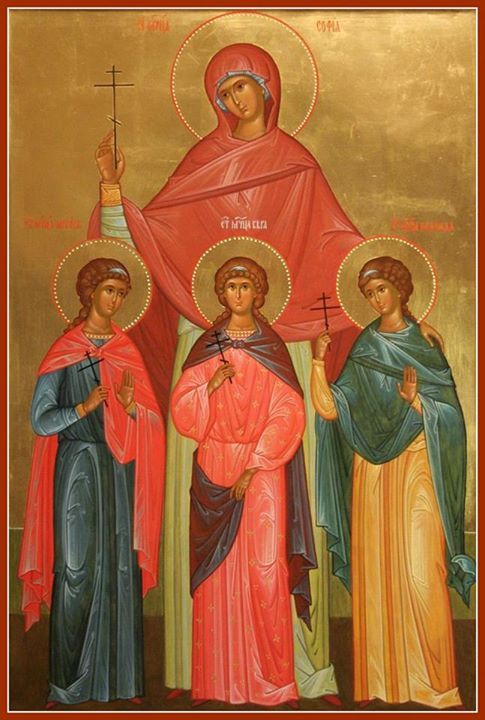 The Holy Martyr Sophia and her daughters  Faith, Hope and Love dwelt in Italy in the reign of Hadrian (117-138). They came of a rich and devout family and their mother Sophia brought them up in the Faith, Hope and Love of the names she had given them. Word of their admirable manner of life reached the Emperor who, hearing they were in Rome, sent soldiers to bring them before him. Considering their tender years, he was amazed at how steadfast in the faith Sophia’s daughters were, and thinking it was only by supporting one another that they were able to hold their own against him, he put them to the question separately.

Pistis (Faith), who was twelve years old, was brought in first. She boldly dismissed the tyrant’s flatteries and deprecated his shameless deeds and vain plots against the Christians. The infuriated Emperor had her stripped, mercilessly beaten and her breasts torn off, whence milk not blood flowed forth. The other tortures she endured were to no avail, for she was protected by the power of God. When, at last, they came to strike off her head, Sophia encouraged her to accept with joy the death that would unite her to Christ.

Elpis (Hope), who was ten years old, was brought in next. Confessing Christ as steadfastly as her sister, she was beaten and cast into a raging furnace, but its fire went out on touching her, in whom love of God burnt with a fiercer flame than material fire. After many other tortures, she too died by the sword, giving thanks to God.

Agape (Love), the third of the sisters, was then summoned before the Emperor whom anger had maddened. She was only nine years old but of the same steadfast mind as her sisters. She was hung on a gallows and chained so tightly that her limbs were broken by the bonds. She was then thrown into a furnace, from which she was delivered by an angel, and finally, beheaded. Sophia rejoiced in spirit to see her daughters so gloriously making their way to the abodes of the righteous but, overwhelmed by earthly sorrow, she gave back her soul to God a few days later at their tomb. Their memories are celebrated on September 17/30.

By Alexa Younes . Taken from the website of the Antiochian Orthodox Christian Archdiocese of North America.