Give Thanks, Affirm and Commit 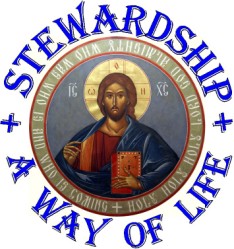 Consistent with its mission statement, the Stewardship Commission of the Diocese presented a proposal to the XXII Sobor/Council in Johnstown October of last year. The mission statement says: Orthodox Christian Stewardship is a Christ-centered lifestyle, which acknowledges accountability, reverence, and responsibility before God. Orthodox Christian Stewardship is a call to all of the faithful to share willingly and cheerfully the gifts that God has bestowed on them including sharing these gifts for God’s work in His Church.

1. That the clergy and people of this Diocese give thanks to Almighty God for the abundance of His blessings and the opportunity to be wise stewards of the gifts of time, talent, and treasure that He so richly provides.

In most all of our relations with God the Holy Trinity, the action is passive. That is to say, God is the actor: we are baptized, we are saved, we are given the gifts of the Spirit, our sins are forgiven, etc. These special actions, baptism, salvation, the Gifts of the Spirit, forgiveness, etc., are actions performed upon us, the subject. God performs them for us. We are recipients of God’s free gifts. We speak in the passive voice about these things – however, we don’t remain passive. Once we receive these very special gifts from God, the action reverses. We no longer remain passive, but become active. We now take action in response to what God has done for us. Three of those actions are the topic of the Stewardship Resolution: give thanks, affirm and commit.

In the parable of the Ten Lepers, it is apparent that Jesus wants us to see that only 10% of all who receive healing ever come back to give thanks to God for that gift. It is somewhat unfortunate that the giving of thanks to God in our American culture comes around formally only once a year, on the fourth Thursday of November. As Orthodox Christians, however, we give thanks every time we attend Divine Liturgy and partake of the Holy Eucharist (“eucharist” being a word of Greek origin that means “giving thanks”!). Thus to commit ourselves to active thanksgiving is not only something we need to do more, but is something we ought to be actively participating in anyway. The resolution calls for us to give thanks not only for God’s gifts that we receive passively, but to give thanks for the additional gift we have been given to actively become good stewards of those gifts.

To affirm is to acknowledge something we already know to be true. For example, those who are married should (daily, anyway) affirm their faithfulness to their spouses – something that may have been done for the first time many years ago. Further, Orthodox Christians pray some prayers over and over again, repeating them until they become fixed in our memories. These prayers are affirmations – they affirm, every time we say them, that which we believe and confess (and know to be true!). Our resolution calls on us to affirm that which we know to be true, but often forget: 1) that the Holy Spirit gives all the gifts needed for the upbuilding of the church; 2) that money offerings to the Church come out of the bounty we have received (and which does not belong to us anyway); and 3) that the Biblical standard of the tithe (giving back to God 10% of what we receive) is the standard that should be the goal for all giving to the Church, whether it is of money, time, or talent. We affirm these things: again, that means we know them already to be true!

Finally, we commit. This is the hardest of the three. Committing means to actively pursue the goal that is set until the goal is reached. The stewardship goals to be committed to here include: 1) the wise use of these gifts for the service of Christ and the growth of His Church; and 2) work(ing) toward tithing as their goal for proportionate financial giving in the Diocese. But goals are just that – goals. They are something we look ahead to reaching, not something we must accomplish in the next day, week, or year(s).

Give thanks. Affirm. Commit. These are active, action words. These are now our words!