Remember your leaders, those who spoke to you the word of God, consider the outcome of their lives and imitate their faith. (Hebrews 13:7) 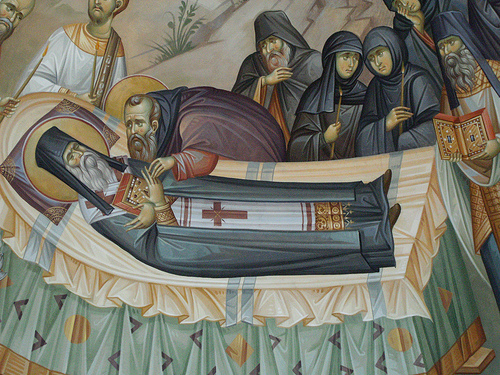 St. Nectarios was born in 1846 in Greece with the name Anastasios Cephalas. When he was fourteen years old his parents sent him to find work in Constantinople since the family was very poor. After working and continuing his education, Anastasios moved to the island of Chios in 1866 where he became a school teacher for seven years. Always a pious, young man with a love for monasteries, on November 7, 1876 he became a monk at the Monastery of Nea Moni and three years later he was ordained a deacon, taking the name "Nectarios". Following theology studies in Athens he was sent to minister to the Orthodox Christians in Egypt where he was ordained a priest and served in the Church of St. Nicholas in Cairo. In recognition of his piety and brilliance as a preacher, he was consecrated the Metropolitan of Pentapolis (an ancient diocese in what is today Libya) by the Patriarch of Alexandria Sophronios in 1889. His genuine faith and virtue, and edifying sermons made him a popular bishop among the common people.

Metropolitan Nectarios' episcopal ministry was to be short lived. He served as a bishop in Cairo for just one year when he was unjustly removed from ministry. His rapid promotion and his popularity provoked the jealousy and envy of his brother priests and bishops who spread rumors to discredit him. They accused him of insubordination and immorality, and convinced the Patriarch of Alexandria that he was seeking the position of patriarch for himself. Metropolitan Nectarios was suspended from his Diocese and sent back to Greece in exile. The campaign of character assassination followed him there. Because of the suspicions and rumors about his moral character no one would give him a job leaving him homeless and destitute. Finally, Nectarios was assigned as a diocesan preacher, a post that a simple monk or even a qualified lay person could fulfill. Nectarios remained humble and did not protest or complain, fulfilling this ministry from 1891-1894.
In time, a number of influential people began to realize that the scandal over Nectarios had no substance, and in fact, he was a holy man of genuine faith. Through their influence he was made dead of the Rizarios Seminary in Athens. But the hustle and bustle of city life did not appeal to him and neither did the politics of church life. He began to look for a place where he could find peace and quiet which he needed for his monastic style of life. He found this on the island of Aegina where he revived an abandoned church and built a woman's monastery. He lived and presented himself so simply, visitors sometimes thought he was an ordinary monk rather than a bishop of the church. He tended the monastery gardens, carried stones, and helped with the construction of the monastery buildings which were built from his own funds. As spiritual father of the convent, his humility, wisdom and insight became well known, with many monastics, priests and lay people seeking him out for counsel and advice. He received the grace of the Holy Spirit which enabled him to foretell things that would happen to those who came to him.

In 1920, Metropolitan Nectarios fell seriously ill with cancer, and despite his protests, the nuns forced him to go to a hospital in Athens. Since he was a man with no financial resources, he was placed in a 3rd-class ward where several beds were reserved for poor patients. He died on the evening of November 9 at the age of 74. But even his death became an occasion for miracles, the first of more than two thousand others. As a nurse and a nun prepared his body for transfer back to the monastery at Aegina, they took off his sweater and placed it for a moment on the bed of a paralyzed man in the adjoining bed. Within the hour the man regained his strength and began to walk. A powerful, sweet smell filled the hospital room and the entire ward. He was buried in his beloved Holy Trinity Monastery on Aegina by his friend St. Savvas of Kalymnos who later painted the first icon of St. Nectarios.
The relics of St. Nectarios were transferred from his grave in 1953 and once again emitted a beautiful fragrance. He was officially glorified as a saint by the Ecumenical Patriarchate of Constantinople in 1961 and his feastday is celebrated on November 9/22. Finally, in 1998, the Holy Synod the Patriarchate of Alexandria in Egypt issued a statement of repentance for casting out the saint:

We hereby restore the ecclesiastical order of the Saint of our century, Saint Nectarios, and grant to him all due credits and honors. We beseech Saint Nectarios to forgive both us, unworthy as we are, and our predecessors, our brothers of the Throne of Alexandria, for opposition to the Saints and for all which, due to human weakness, our Holy Father,
Bishop of Pentapolis, Saint Nectarios, suffered.

The Dark Side of the Church

Anyone who is involved in church life for even a brief time quickly learns that there is a "dark side" of the church. The saintly Metropolitan Anthony Bloom of England said The Church has a glorious aspect and a tragic one. Disagreements among priests and their bishop, conflicts among priests and parishioners, fights among parishioners, court cases, insults, envy, jealousy, politics, anger, back biting, gossiping all can be found in churches which preach and teach love, truth, joy, kindness and peace. The life of St. Nectarios is a potent illustration of this. He suffered not from unbelievers, nor Roman emperors, nor Communist officials but from his fellow Orthodox Christian priests and bishops! What is instructive for us is to observe how he reacted to this persecution. In America, he would hire a lawyer and sue for defamation of character! Today he would quit the church: They're all a bunch of hypocrites anyway! He would complain to everyone about his treatment in the church and conclude with I don't believe in organized religion. St. Nectarios accepted his unjust punishment with silence and humility. He recognized that the Church is not a "garden for saints" but a "hospital for sinners". St. Nectarios knew his own sinful tendencies and passions and struggled against them with repentance. He saw that bishops, priests, and people of the Church were also afflicted with various sinful passions and that they were in need of healing in the Church. It has been said, It is more dangerous to lose belief in man's fall, than to lose faith in God. The Church is holy, it is the body of Christ on earth, but it is composed of weak, sinful, fallen human beings.
As we honor the memory of this modern saint let us remember his experience with this dark side of the Church. As we ask for his powerful, miraculous intercession before the Lord may we never lose sight of our own sinful passions and our own need for repentance!

The offspring of Selybria and the guardian of Aegina,
the true friend of virtue who appeared in the last years.
O Nectarios, we faithful honor you as a Godly servant of Christ.
For you pour out healings of every kind for those who piously cry out:
Glory to Christ who has glorified you!
Glory to Him who has made you wondrous!
Glory to Him who works healings for all through you.