The Surgeon and Saint The province of Crimea dominated the news back in March as the nations of Ukraine and Russia were locked in a struggle to determine the future of this region.  Whatever one’s political leanings – toward Ukraine or Russia, Orthodox Christians know that the land of Crimea is blessed by the presence of a modern day saint and miracle worker:  St. Luke the Surgeon, bishop of Simferopol and Crimea.

The future St. Luke was born on April 27, 1877 with the name Valentin Felixovich Voino-Yasenetsky in the eastern area of Crimea.  His parents were not active in the practice of their Faith as he noted in his memoirs “I did not receive a religious upbringing...”   He described his first true understanding of his Christian Faith after reading the New Testament which was a graduation gift from his high school principal.  This Bible became his constant companion, studying and underlining meaningful passages in red ink.  With a natural talent for art, Valentin intended to study at an art institute but decided he should devote his life to benefit suffering people.  He decided to enroll in medical school of Kiev University in order to devote his life to alleviating suffering among the peasants in the remote villages.  He wrote in his memoirs:  “I studied medicine with the sole purpose of becoming a villager, a peasant doctor, and helping poor people”.   Upon his graduation he received additional training in opthamology and general surgery and from 1905-1917 he practiced medicine and surgery in various district hospitals.  During this time he married a nurse by the name of Anna Lanskaya who had the nickname among her patients as “the holy nurse”.  Together Valentin and Anna were blessed with four children.  Dr. Valentin became known not only as a skilled medical doctor but as a compassionate human being.  He wrote in a letter to his son:

“I suffer deeply if a patient dies after an operation.  I had three deaths in the operating room and this literally crushed me….I prayed for the dead at home, because there is no church open here…

The year 1917 found Dr. Valentin in the city of Tashkent as the head surgeon in the largest city hospital as well as a professor in the college of medicine.  In that year the Russian Revolution erupted across the nation and with it a civil war which soon reached the remote Tashkent region.  As the Communists assumed power, they began an organized campaign against religious faith.  Dr. Valentin was under constant threat since he had become a devout Orthodox Christian and refused to conduct surgery without an icon of the Theotokos hanging in the operating room, beginning each surgical procedure with the Sign of the Cross.  He was arrested for the first time in October of 1919 on false charges and was nearly executed by firing squad.  Several days later, his beloved wife died from tuberculosis at the age of 38 leaving him a widower with four children.

The Bishop of the Tashkent diocese, Innocent, became acquainted with the well known doctor and admired his deep Orthodox faith.  After hearing Dr. Valentin speak at a Diocesan meeting he said:  “Doctor, you must become a priest!   St. Luke later wrote in his memoirs:

I had never thought about being a priest, but I accepted the words of the Right Reverend Innocent as God’s calling pronounced by the bishop’s lips, and without the slightest hesitation, I replied, ‘Be it as you say, Vladyka, I will be a priest if it is pleasing to God.’”

In the midst of the fierce persecution of the Church by the Communists, when many clergy were renouncing their faith and their priesthood in order to be spared persecution, Dr. Valentin was ordained on February 15, 1921.  The new priest continued his practice of medicine and surgery, giving his lectures and receiving patients while wearing his cassock and priestly cross.

During the time of terror, Bishop Innocent of Tashkent disappeared and the clergy of the Diocese elected Fr. Valentin to be the new bishop.   He was tonsured a monk with the name of the Evangelist St. Luke the Physician, and was consecrated as a bishop in secret, with the church doors locked on May 31, 1923.  One month after his consecration, Bishop Luke was arrested and sentenced to imprisonment and exile to Siberia, the beginning of his sharing in the sufferings of Christ.  This was only the first of three times that the bishop was arrested and sent into exile, which he endured for a total of 11 years.  He endured extreme cold, hunger, betrayal by fellow priests, solitary confinement, beatings, humiliation and a special kind of torture known as “the conveyor” in which Communist agents took turns with beatings and interrogations which continued nonstop for days.  The bishop never relented in his devotion to Christ.  He later wrote:

They tell me to take off the cassock, but I will never do it.  The cassock will remain with me until death…I don’t know what they want from me.  I believe in God.  I help people as a doctor; I help also as a pastor of the Church.  Whom do I harm?

While many Orthodox Christians tend to “compartmentalize” their faith, that is, reserve it for Sundays and when involved in “church things”, Bishop Luke’s Orthodox faith was a part of his daily life and secular career, even under the threat of arrest and torture.

With the beginning of World War II and the invasion of Russia by the Nazi Germans, the Communist government began to ease their persecution against the Church in order to rally the people to the defense of the country.  Bishop Luke was freed from exile in 1942 and resumed his episcopal ministry as well as his medical practice.  He published two scientific works:  Essays on the Surgery of Pyogenic Infections and Late Resections of Infected Gunshot Wounds in Joints for which he was awarded the prestigious Stalin Award, using the prize money to help children victimized by the war. Despite the easing of open persecution against the Church, Bishop Luke continued his ministry as a bishop under very difficult circumstances.  The bishop found churches and monasteries in ruins throughout his diocese with few priests.  Many of the priests were negligent in their pastoral duties, officiating at services in a mechanical way, viewing the priesthood simply as a job.  Government officials used any excuse to close a church and intervened in parish councils, appointing atheists, thieves and alcoholics to interfere in the daily administration of parishes.  The bishop’s mail was opened, his telephone conversations were recorded and government agents regularly photographed lay people who participated in his divine services.

The bishop lived simply and poorly, occupying two rooms in a decrepit old house with many of the neighborhood poor coming for food which the bishop provided for everyone.  He served the Divine Liturgy nearly every day even after losing his sight in 1956.  As his health failed and he recognized that the end of his life was near, he reflected on his life and ministry:

My long journey was difficult a nd thorny, but at the same time it was also a remarkably blessed one.  God’s grace was with me along the way, and my path was illumined by the light of Christ.  And it is a joy for me, a very great joy, to have traveled that path.  It was a great act of kindness done by God for me.  I consider the difficult years of priesthood, soon followed by my service as a bishop, not as burdensome, but as the most blessed, best, happiest years of my life.

On June 11, 1961, the blessed bishop and surgeon fell asleep in the Lord at the age of 84.  Soon miraculous healings began to be reported at his tomb and when it was opened in 1996 an indescribable aroma emanated from his body.  He was glorified as a Saint of the Orthodox Church in 2000 and his relics continue to work miracles at the Cathedral in Simferopol, Crimea 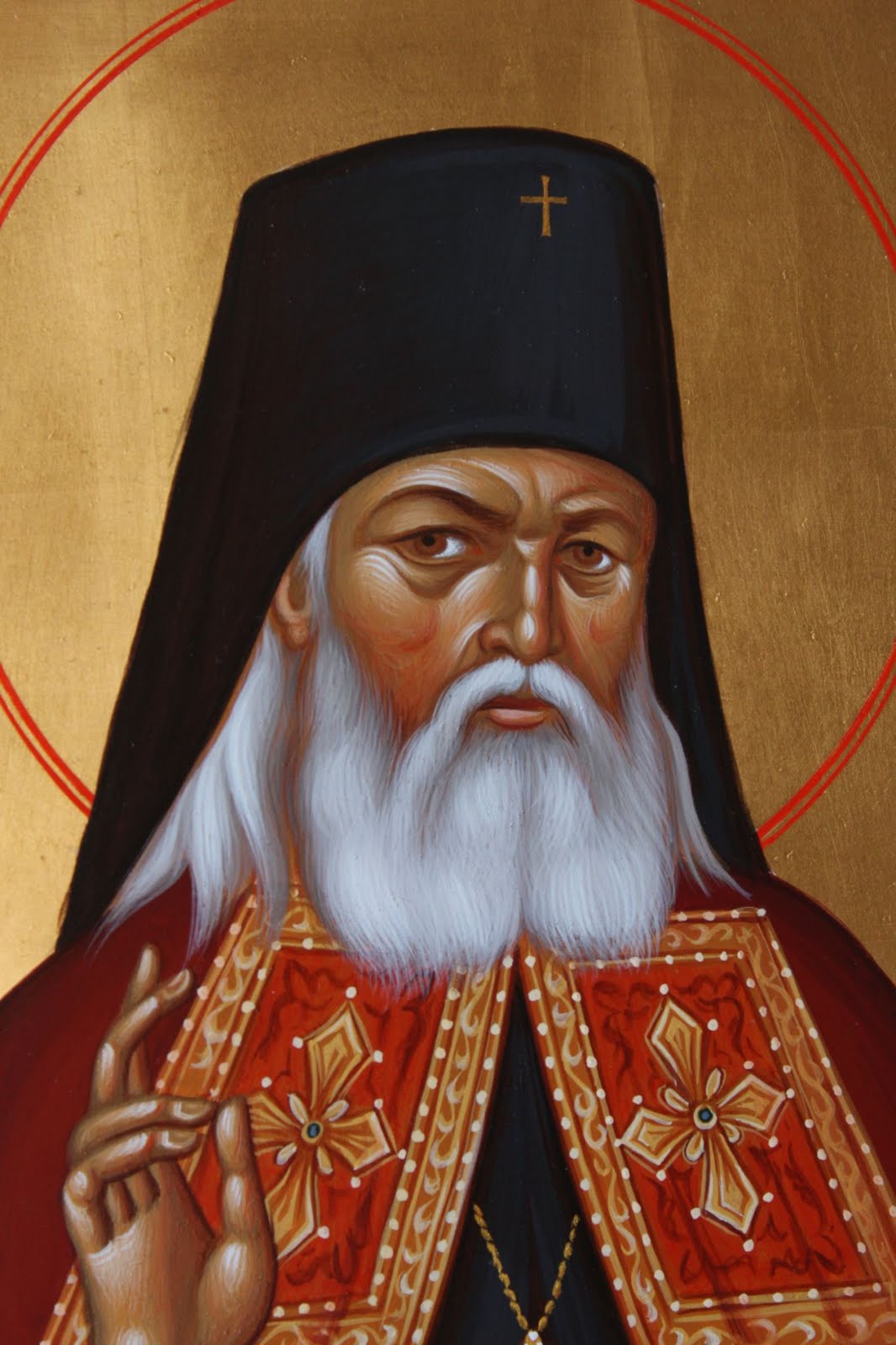 O herald of the way of salvation,
Confessor and archpastor of the Crimean flock,
faithful keeper of the traditions of the fathers,
unshakeable pillar and teacher of Orthodoxy,
pray unceasingly to Christ our Savior
to grant salvation and strong faith to Orthodox Christians
O holy hierarch Luke, physician wise in God.