“At this first visit of mine to you, beloved brethren, the words come to my mind said by the Lord at one time through the Prophet Hosea, ‘I will say to them who were not my people, Thou art my people’…… I left the beloved motherland, my elderly mother, people familiar and close to me, those who are dear to my heart, and departed to a faraway land—to you, people not familiar to me so that from now on you become my people and my beloved ones."

With these words one of the youngest bishops of the Orthodox Church of Russia greeted his new flock in America.  Consecrated bishop at the young age of 32, he was assigned to the Russian Orthodox missionary diocese of America in 1898.  Bishop Tikhon, later Patriarch Tikhon of Russia, one of the most important Orthodox leaders of the 20th century, faithfully served the Lord in America and ended his life enduring severe persecution by the Communists in Russia.

The details of his early life are unremarkable and not at all unusual.  St. Tikhon was born with the name Vasily Belavin in 1865, the son of priest in a small village in Russia.  He graduated from the Pskov seminary, then from the advanced theological academy in St. Petersburg followed by tonsure as a monk with the name “Tikhon” at the age of 26.  After short time as a seminary professor and administrator he was consecrated bishop in 1897 briefly serving as a vicar or assistant bishop.   Aside from these details of his early life, of special interest to us are the two defining periods of his life:  his American ministry and his ministry as the Patriarch of Russia during the dark days of the Russian Revolution and the rise of the militantly atheistic Bolsheviks.

Bishop Tikhon arrived at his cathedral in San Francisco and the “Diocese of the Aleutians and Alaska” as it was then known, taking up the episcopal see once held by the illustrious St. Innocent Veniaminov – Apostle of America.  Recognizing that the growth of his new Diocese was in the “lower 48” the name of the diocese was changed to “Diocese of the Aleutians and North America”.    He began traveling the vast distance of his new diocese from Canada to New York, Texas to California and Alaska, visiting, encouraging and nurturing newly founded Orthodox parishes.

As the only Orthodox bishop at that time in America his flock consisted of Russians, Serbs, Carpatho-Russians, Greeks, Arabs and members of native Alaskan tribes.  Recognizing the unity of all Orthodox people regardless of ethnic descent he established separate vicariates one for Arabs in New York led by Bishop Raphael Hawaweeny (since canonized as St. Raphael) and one for Serbs in Chicago led by Father Sebastian Dabovich (since canonized as St. Sebastian).  A seminary to train American priests was established in Minneapolis and the first monastery in America in South Canaan, Pennsylvania.  The number of parishes increased from fifteen to over seventy including many who were led out of the Unia to their ancestral Orthodox Faith.  With the explosive growth of the Diocese in the eastern United States, the Diocesan see was moved from San Francisco to New York City and a new cathedral was constructed – St. Nicholas on 97th Street in Manhattan.

His ministry in America was not only fruitful for the Orthodox people but for himself personally.  For the first time in his life he was exposed to a diverse society composed of peoples of multiple languages, races, ethnicities and religions requiring a new style of pastoral ministry from that typical in Russia.  In Russia, the Church functioned almost as a department of state overseen by the Tsar.  Here in America he recognized a new path was needed for the Church:   a collaborative one that included lay people with clergy in overseeing and being responsible for the work of the Church, highly unusual for the time.   Using the ancient model of councils and synods the Diocese convened the first Sobor or Council of the American Diocese with clergy and lay delegates meeting in Mayfield, Pennsylvania in 1907.

Shortly after the Sobor was announced, word came from Russia that Bishop Tikhon was transferred to a new diocese in Russia.  In his farewell sermon to his American flock he prayed:

And thus at my departure from you, the present prayer of mine to the Heavenly Father is that He preserve you in the right Faith and save you from the hostility of enemies… How could we not worry for the small flock of ours?  How easily can the wind blow out a candle lit in an open room!  How easily can the waves of the sea drown the sailor in a fragile vessel!  We cannot boast of our large numbers, or fame, or wealth, or education – all that is valuable in the eyes of the world. We are strong here only with the true, right Faith… 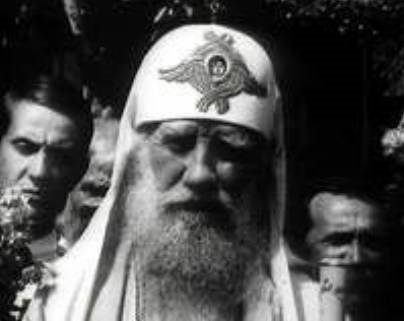 Returning to his homeland, Bishop Tikhon became the Diocesan bishop of Yaroslavl and later Vilnius in Lithuania.  The Russian Revolution and the overthrow of the Tsar in 1917 had dramatic effects on the Orthodox Church – initially positive.  Rather than receive bishops appointed by the Tsar, many Diocese began to elect their own hierarchs through a congress of clergy and laity.  Thus Tikhon was elected to become the new metropolitan of Moscow, the most prestigious see in the country.   Another positive development that coincided with the Russian revolution was the convening of a council of the entire Orthodox Church of Russia which had been in the planning stages for several years.  At this council it was decided to restore the office of Patriarch which had been abolished by Tsar Peter the Great in 1721 as a means of exercising control over the Church.  In the midst of gunfire outside as revolutionary factions fought for control of the government, Tikhon was elected Patriarch of Russia, his name being pulled from three ballots placed in an urn in front of the famed Vladimir icon of the Theotokos.  Tikhon’s response to his election was a foreshadowing of what he faced:

Your news about my election for the Patriarchate is to me that scroll on which was written: “Weeping, sighing, and sorrow” which scroll had to be eaten by the prophet Ezekiel (2:10; 3:1)  How many tears will I have to swallow or how many sighs emit in my forthcoming Patriarchal office  and especially in the present woeful time.

As soon as they gained power the Bolsheviks began their attack to dismantle the Church and to destroy the Orthodox Faith of the people.  Churches and monasteries were closed, religious education and charity work by the Church ruled illegal.  Beginning with Metropolitan Vladimir of Kiev, bishops, priest and lay people were led to firing squads. Between 1918-1919 28 bishops and over 1,400 priests were killed.   Soon the government found a new method to undermine the Church:  divide and conquer.  A rival church was set up, subservient to the Soviet government, known as the “Living Church” composed of disgruntled bishops and priests who opposed Patriarch Tikhon.  Tikhon was accused of being a “weak-willed, soft-hearted character who never wielded any authority…in general, he is just a random individual”.  One bishop was unimpressed by him:   “he’s always laughing and petting the cat”.  His sense of humor put people at ease and often defused tense situations.  In the 1920s he had a sign in his office at the Donskoy Monastery “Not available for questions concerning counter-revolution”.   His humble, gentle manner gave the impression that he was a weak and an ineffective leader.  But behind his mild façade was a faith of steel ready to confront the persecutors of the Faith.  His response to the attacks on the Church was clear:

The Holy Orthodox Church of Christ is at present passing through difficult times in the Russian land; the open and secret foes of the truth of Christ began persecuting that truth,  and are striving to destroy the work of Christ by sowing everywhere in place of Christian love the seeds of malice, hatred, and fratricidal warfare……We appeal to all of you, believing and faithful children of the Church; rise up in defense of our injured and oppressed holy Mother.  The enemies of the Church seize rule over her property by force of death-dealing weapons;  but you, rise to oppose them with the strength of your faith…. And if it should become necessary to suffer on behalf of the cause of Christ,  we invite you, beloved children of the Church, to suffer along with us…

He instructed his priests:  “Devote all your energy to preaching the word of God and the truth of Christ, especially today, when unbelief and atheism are audaciously attacking the Church of Christ.”  The Bolsheviks responded by placing the Patriarch first under house arrest and then in the dreaded Lubyanka prison.  The government had pronounced a death sentence against him and was ready to place him before a firing squad except that word of his arrest reached the West and caused an outcry from Western governments and churches.  He was attacked and stabbed by an insane woman while leaving his cathedral in 1919 but only slightly wounded.  A second attempt on his life occurred in 1924 when unknown assailants broke into his apartment and killed his personal assistant while Tikhon was praying in the next room.  How did Tikhon react to all that he endured?  One of the Red Army soldiers assigned to guard him during his house arrest recalled “The old man is good to everyone, only he prays all night and we can’t sleep”. Worn down from years of harassment and persecution, the Patriarch’s health began to decline in 1924.  On Sunday, April 5, 1925 he celebrated his last Divine Liturgy before entering the hospital.  He died on April 7, 1925 shortly after making the Sign of the Cross and saying “Glory to Thee, O Lord, glory to Thee”.  To this day it is suspected that he had been poisoned and did not succumb from a heart attack as noted in the official reports.  While the actual cause of his death cannot be proven, he deserves the title of “Confessor of the Faith”; that is, one who suffered for Christ.   He was numbered among the saints by the Council of Bishops of the Orthodox Church of Russia in 1989.

Following his burial in the Donskoy Monastery his relics were lost, having been at some point hidden to prevent their destruction by the Communists.  Their hatred of him was so great that in a “list of enemies of Soviet authority” published in a newspaper, his name was first.  In 1992 during repair work on the church following a fire, his incorrupt holy relics were discovered hidden beneath the floor.

St. Tikhon, Enlightener of North America
Patriarch of Moscow
Confessor of the Faith
pray for us!