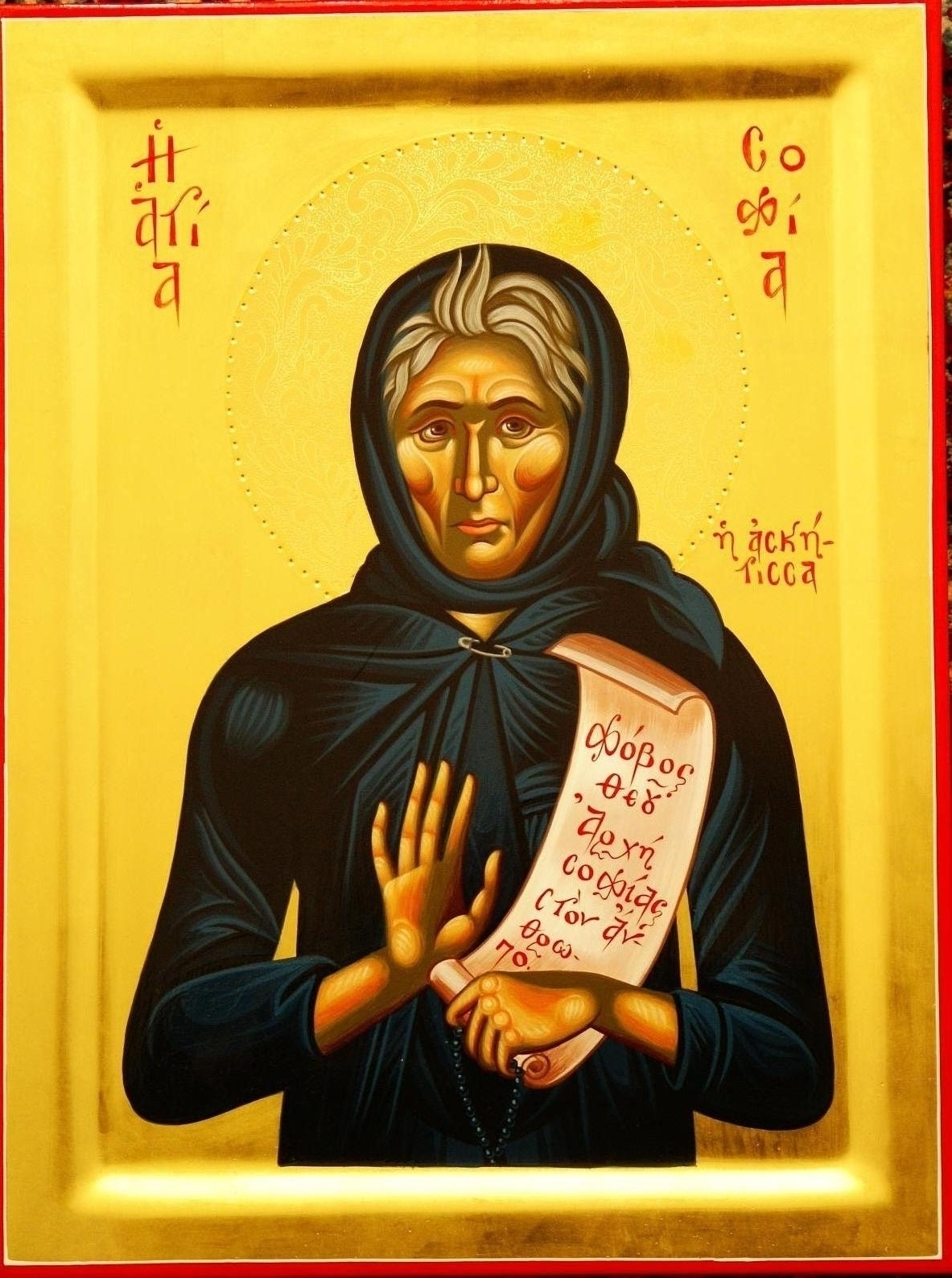 On October 4, 2011, our Ecumenical Patriarch Bartholomew, with the Holy Synod of Bishops officially numbered among the saints the Eldress Sophia, Ascetic of Kleisoura, Greece.  St. Sophia was born as Sophia Saoulidi in 1883 in the village of Trebizond in present-day Turkey.  In 1907 she married Jordan Hortokoridou but in 1914 he disappeared (likely against his will) leaving her as the single mother of a new born son.  She faced another tragedy shortly after the loss of her husband when this her only child died.  Sophia became totally dependent upon God and began to spend increasing amounts of time in prayer on a nearby mountain.

In 1919 Sophia arrived in Greece, and on her arrival the Blessed Theotokos appeared to her and said “Come to my house”.  When Sophia asked where should could find her house, the Blessed Mother replied:  “I am in Kleisoura”.  Obedient to the command of the Mother of God, Sophia settled in the Monastery of the Nativity of the Theotokos in Kleisoura, about three hours from Thessalonica.  Here she remained for the rest of her long life, never formally taking the vows and tonsure as a nun.  Sophia took us residence in the monastery kitchen sleeping two hours a night and spending the rest of the night on her knees in prayer.  She dressed very poorly and had a blanket and shoes full of holes.  When she was given clothing by visitors to the monastery she would give them away to the poor.  She had no interest in food, eating only enough to survive.  When visitors would give her money, she would hide it and retrieve it only when she found someone in need.  Because of her ascetic lifestyle and shabby appearance many people without a spiritual foundation called her “Crazy Sophia” but others saw in her a lifestyle much like the saints of old.  To those who came to her she taught:

Almsgiving should be in secret, for God alone to know.

The angels speak every day.  God sends the angels to see if people are repenting.

The Mother of God weeps, she weeps every day.  She says to her Son:  “My Son and my God, grant the world wisdom, forgive the world.”

The fear of God makes a person wise.  What is the fear of God?  Not that one should be afraid of God, but to be afraid to sadden someone, to harm someone, to do them no wrong, and to not make accusations.  This is wisdom.  After all this, God will illumine you as to what  to do in your life.

When she observed scandalous behavior of priests and lay people, she never condemned anyone but said:  “Cover things, so that God will cover you”.

Through her prayer and fasting she became a vessel of the gifts of the Holy Spirit.   The Bible teaches in 1 Corinthians chapter 12  that when a person is purified and filled with the Holy Spirit they will receive certain gifts of the Holy Spirit such a healing, knowledge, miracles, prophecy.  St. Sophia was especially endowed with the gift of prophecy.   When visitors arrived she would say their names before they introduced themselves and knew their family problems.  In 1967 she became seriously ill and in great pain but was healed through a vision of the Blessed Theotokos, the Archangel Gabriel and St. George.  Elderess Sophia fell asleep in the Lord on May 6, 1974 and her relics are now enshrined in the Monastery church.   Her feastday is observed on May 6 (new calendar), the day of her repose in the Lord.

Our new saint Sophia is listed in the category of saints called “ascetics”.  The word ascetic comes from the Greek word askesis meaning practice or exercise, especially as it is related to athletics.  It also comes from the Greek word askein which means to work.  Ascetics are saints who especially underwent rigorous efforts of prayer, fasting and self-denial in order to attain theosis, or union with God.  Just as an athlete will train and follow a special diet in order to win an athletic event, the ascetic saints underwent the same in order to achieve salvation and theosis.  The Holy Bible describes the practice of asceticism in the writings of St. Paul:

Do you not know that those who run in a race all run, but one receives the prize?  Run in such a way that you may obtain it.  And everyone who competes for the prize is temperate in all things.  Now they do it to obtain a perishable crown, but we for an imperishable crown.  Therefore I run thus:  not with uncertainty.  Thus I fight:  not as one who beats the air.

But I discipline my body and bring it into subjection, lest, when I have preached to others, I myself should become disqualified.    (1 Corinthians 9:24-27)

Are we to live like St. Sophia, dressed in rags, sleeping little and spending nights in prayer?  Some of us may be called to this but for those of us with a family and a home to maintain such a lifestyle is impossible.   But, as St. Paul teaches, all Christians are called to some forms of asceticism.  We must keep in mind, first of all, that we will be saved not by our own efforts or by doing “religious things” like fasting or dressing in rags.  Salvation will be granted to us as a gift as long as my life is joined to Jesus:  He is the Savior.   But there are desires in me, sinful passions in me, and forces and temptations in the world around me that want to separate me from Jesus.  If I can practice a small form of asceticism like saying No! to a hamburger on a fast day, I can then more easily say No! whenever sinful temptations come my way.  If I can practice self control with what goes into my mouth I can more easily control what comes out in my words.  If I can discipline myself to pay attention as I stand in prayer, I can more easily control what I focus my eyes on each day.  How can we expect our children to avoid the temptations of drugs and alcohol if we have never taught them how to learn self control by fasting?  May the example of St. Sophia and all the ascetic saints strengthen us as we run our own race and seek an imperishable crown of glory from the Lord!

O Blessed Mother Sophia, you became wise and the adornment of the Mother of God, you lived an ascetic life in the monastery, from which has spread the praise of your struggles, striking the ranks of demons.  As you now stand as in intercessor before Christ, do not neglect those who fervently honor you.

You became a treasury of divine wisdom and all-consuming fear of God, O Mother Sophia. Through your motherly intercessions, O Blessed One, you offer to all the richness of grace.