The Apostle To Japan 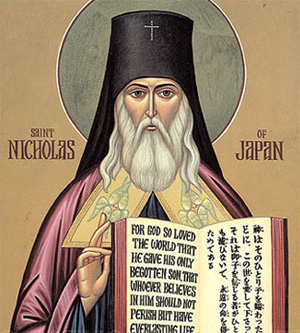 February 3, 2012 marked the centennial of the death of Archbishop Nicholas (Kasatkin) of Tokyo who is venerated around the world as the "Enlightener of Japan" and "Equal-to-the-Apostles". By the time of his death in 1912 St. Nicholas left behind a church that grew from one man with one convert to over 35,000 Orthodox Christians, 32 priests, 96 churches, and 265 chapels.

St. Nicholas was born with the name Ivan Kasatkin in the Smolensk province of Russia. His mother died when he was age five leaving his father, the parish deacon, to raise him alone. He entered the seminary, and due to the poverty of his family he would walk the 150 miles to and from the seminary at the beginning and end of each semester. Being a gifted and intelligent student, upon graduation in 1857, he received a scholarship for advanced studies at the St. Petersburg Theological Academy. With a special aptitude for the study of the Church Fathers (Patristics) and for foreign languages he was headed for a career as a seminary professor. But as the words of the Scripture states: Many are the plans in a man's heart, but it is the Lord's purpose that prevails. (Proverbs 19:21) One day, Ivan saw a notice on the seminary bulletin board requesting applications from students interested in working at the Russian consulate in Japan. Initially the rector of the Academy, Bishop Nektary, was opposed to sending Ivan to Japan feeling that he would be wasting his academic talents in such a far off, pagan land. Finally, after much reluctance on his part and on the part of the Holy Synod, Ivan received permission to leave for Japan. First he was professed as a monk, taking the name of Nicholas, then ordained as a deacon and priest in June, 1860.

Father Nicholas left for his new assignment in Hakodate, Japan the next month. Unable to reach Japan before winter set in, he was forced to spend the winter in city of Nikolaevsk in the Russian Far East. While this delay seemed at first to be a waste of time, the words of Proverbs 19 once again proved true in the life of the young priest. While in Nikolaevsk he was able to meet and spend time with Archbishop Innocent (Veniaminov) the great missionary to Alaska (now St. Innocent, Apostle of America). With decades of missionary experience behind him, St. Innocent advised Father Nicholas to first learn the Japanese language, begin translating the Scriptures and not be tempted by setbacks and disappointments. St. Innocent even sewed a new cassock for the priest and gave him the bronze cross he had been wearing.

After a year of traveling, Father Nicholas arrived in Japan in 1861 and expected flocks of people gather to hear him preach the Gospel. He later wrote:

I was young and not devoid of imagination, which painted a picture of crowds of listeners then followers of the word of God coming from all directions. Imagine my disappointment when I arrived in Japan only to be greeted by the exact opposite of what I had dreamed.

The Japanese regarded these foreigners with suspicion and mostly ignored them. In fact the preaching of Christianity was forbidden by law and converts were threatened with death. The new missionary resigned himself to simply serving the small Russian community at the Russian embassy and reading the books in their library. It was only another encounter with the saintly Archbishop Innocent (Veniaminov) that changed the direction of Father Nicholas' life. Traveling through Japan, he stopped to see the young priest. St. Innocent counseled him to put away the library books he was reading and to begin a serious study of the Japanese language. After seven years of language study, Father Nicholas felt prepared to begin preaching the Gospel to the Japanese people. A samurai Shinto priest by the name of Takuma Sawabe came to Father Nicholas one night with the intention of forcing him to leave the country or killing him.

We must kill all you foreigners. Your preaching brings evil and harm to Japan. You came to spy on our country. I would sooner kill you than permit preaching.

Father Nicholas persuaded him to listen to what he had to say before killing him. Takuma heard the message of God, sin, the soul and eternal life. He was so moved that he received baptism in 1868 along with two of his friends Sakai and Urano. The Orthodox Church in Japan had begun!

The new converts faced danger from the hostile government and were forced to go into hiding to save their lives. Father Nicholas supplied them with Orthodox books and sent them off across the country with little hope that they would be able to spread the Faith. He wrote:

The goal of their journey, besides the obvious one of saving them from danger, was to enable them to get in touch with the currents of thought in various places, to discover the kind of people necessary for our work, and finally, if possible, to lay the foundation for Christian groups. But, frankly, I had little hope for their success. As long as they remained safe it would be enough.

Despite the danger, Father Nicholas continued to attract catechumens as did his new converts: Takuma, Sakai and Urano. In 1869, Father Nicholas returned to Russia to report on his efforts and the Church set up a formal Mission. By 1873 the persecution of Christians in Japan had eased which allowed more widespread preaching and teaching. The Orthodox mission grew rapidly. In 1873 schools were established, in 1878 a seminary, in 1874 the first Japanese candidates were ordained priests and deacons. The first man to be ordained a priest was his first convert, Takuma Sawabe who became Father Paul Sawabe. By 1878 there were 4,115 Orthodox Christians, by 1879 7,000. Because of the fast growth of the new Church, in 1880 Father Nicholas returned to Russia to be consecrated as the first bishop of Tokyo.

Bishop Nicholas spent much of his time in translating the Bible and the liturgical services from Russian to Japanese. For thirty years he spent every evening from 6:00 till 10:00 on this project. By the end of his life, taking one verse at a time, Bishop Nicholas provided the Scriptures, liturgical books, prayers, theological texts which are still used by the Orthodox Church of Japan. Along with his translation work, Bishop Nicholas devoted much time to visiting all of the parishes and communities of the Church. He held discussion sessions with the parishioners, made a point to meet with the children and performed baptisms. A major project was the construction of Holy Resurrection Cathedral in Tokyo which was consecrated in 1891. Today it is a tourist attraction in Tokyo and is commonly called "Nikorai-do" or "House of Nicholas".

Bishop Nicholas lived a simple life, living in Tokyo for forty years in two small rooms. His clothes were patched because he washed them many times and would not throw them away. When his assistant, Bishop Sergei, checked his rooms after his death, he found nothing but some old underwear. 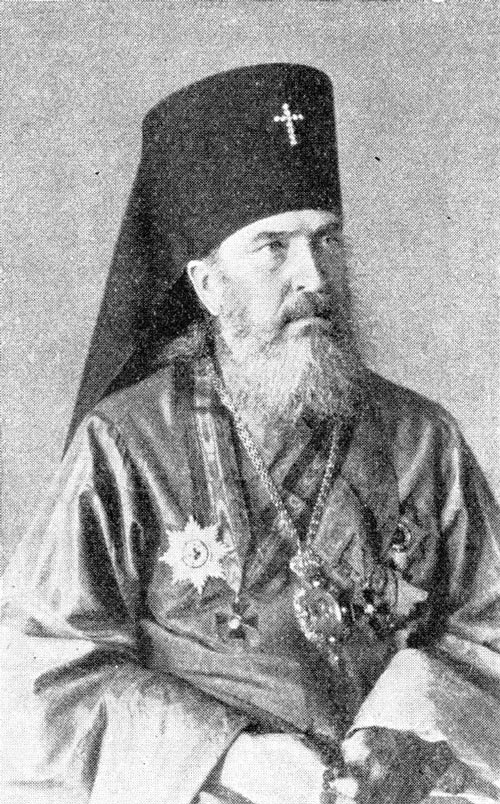 Bishop Nicholas celebrated his last Divine Liturgy on Christmas Day, January 7, 1912 after which he fell ill and was hospitalized. He continued his translation work from his hospital bed and met Bishop Sergei to review a ten-year plan for the future of the Mission. As he came to the end of his life he reflected on his life, showing his great humility:

As I look her upon the path I've followed in my life...and what of it, then?...Only darkness...Everything was done by God, and I...what an insignificance!....Nothing, nil, literally nil...And yet if a righteous man barely attains to salvation, then where will I – a sinner – find myself? I am deserving of the worst place in the abyss.

He fell asleep in the Lord on February 16, 1912 and was buried following a massive funeral sung entirely in Japanese by a 200 member student choir. He was glorified as the first saint of Japan in 1970.

O holy Saint Nicholas, the Enlightener of Japan
You share the dignity and the throne of the Apostles;
You are a wise and faithful servant of Christ,
A temple chosen by the Divine Spirit,
A vessel overflowing with the love of Christ.
O hierarch equal to the Apostles,
Pray to the life-creating Trinity
For all your flock and for the whole world.

Upon arriving in Japan, St. Nicholas was initially satisfied with serving "his people", that is, the small Russian community in Japan. This has been the problem with Orthodox Christians in America: we have limited the mission of our Church to serve our people. We do welcome others into our churches but we exist primarily to serve the religious needs of our people. We have neglected the final command of Jesus: Go therefore and make disciples of all nations....(Matthew 28:19) There are people all around us who are yearning for a meaning in life which only Jesus can provide. There are people in our communities who are open to a Christian Church that was established by the Lord Jesus Himself and not some human reformer. There are people looking for the preaching and teaching of the Gospel that is unchanged from the time of the Apostles. While the steps that a parish can undertake to begin outreach work is beyond this short article, there are several simple steps every parish can and must take:

Are the times of services clearly listed on the outside of your church with a welcome sign to all? Is your parish visible on the internet with a website that is regularly updated? Are visitors warmly welcomed to your parish and escorted to the social hour afterwards? (From my experience in several parishes, this often does not happen.) Are there booklets and brochures on the Orthodox Faith available in the vestibule and/or hall? Do we offer avenues for spiritual growth such as regular Bible Studies or other small groups?

May the life and example of St. Nicholas of Japan inspire us to move beyond the comfort of serving our people!