Remember your leaders, those who spoke to you the word of God;
consider the outcome of their life,  and imitate their faith.   (Hebrews 13:7) 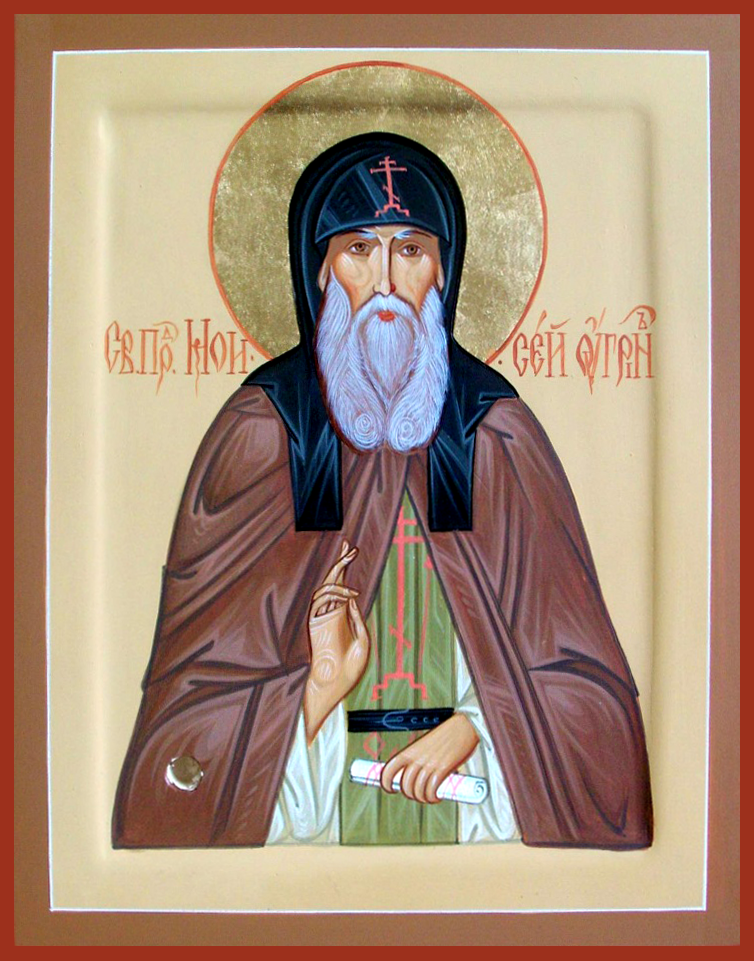 Our Holy Father Moses of the Carpathians, also known as St. Moses the Hungarian or St. Moses Uhrin was a native of the Carpathian Mountain region of Eastern Europe in the 9th century A.D.  He was the brother of St. Ephraim of New Torzhok and St. George and together they were in the service of the Holy Prince Boris, a son of the Holy Prince Vladimir.  Prince Boris, knowing that his brother Sviatopolk was seeking to kill him in order to gain power, refused to bring violence against his own brother and was brutally murdered while was chanting Psalms.  St. Boris, with his brother St. Gleb, were the first saints canonized by the Orthodox Church of Russia.  After Boris’ murder, Moses fled and hid in Kiev with Predislava, sister of Prince Yaroslav.  In 1018, the Polish king Boleslav conquered Kiev and St. Moses and his companions were taken away to Poland in chains.

St. Moses was said to be tall, muscular and handsome and he attracted the attention and lustful desire of a certain wealthy Polish widow.  She bought Moses from Boleslav and took him to her estate with the intention of seducing him and marrying him. With Moses as her slave, she had him clothed in expensive clothes and fed the richest of foods as she attempted to entice him into fornication.   “If you will yield to me, I will deliver you and make you great in all Poland, and you will rule over my estates”.  Moses refused to yield to her sinful lust “Know that I will not fulfill your desires.  I want neither power nor wealth, but I seek spiritual and physical purity.”  She forced him into her bed where she embraced and kissed him but Moses remained steadfast:  “From the fear of God I loathe you as impure.”   A monk from the Holy Mountain – Mount Athos was passing  through the area at this time and heard about Moses so he came to him at night, teaching him further about the spiritual life and tonsured him a monk.  When the woman heard what had happened she was enraged and ordered Moses to be beaten with iron rods and thrown into prison fed only dry bread and water.  Other slaves encourage Moses to submit to the woman and to consider what riches and power awaited him.  He remained adamant:

Though many of the righteous were saved with wives, I am a sinner and I will not be saved with her.  I want neither kingdom nor power in the Polish land, but I seek the higher, heavenly kingdom.  Even if I am deprived of life, I will not listen to the advice of this woman, and I will remain like a monk, for Christ said in His Gospel, whoever has left his home and brethren, father and mother or foregoes wife or children or village for the sake of His name will inherit eternal life.  Shall I heed Christ, or you?

During this time in which St. Moses was being tormented, a rebellion broke out in the land, King Boleslav and this wealthy woman were both killed.  Moses was freed from his slavery and the persecution he endured for six years.  Faithful to his monastic tonsure and desiring only the Kingdom of God, Moses traveled to the city of Kiev and entered the Monastery of the Caves where he led an ascetic lifestyle:  struggling through prayer and fasting to conquer his sinful passions.  Once a fellow monk who was struggling with sexual temptation went to St. Moses and asked for his help in defeating this passion.  St. Moses, holding a staff in his hand (which he used to walk since he remained crippled from the wounds he endured in Poland) struck the monk in the chest and immediately this brother was delivered from his sinful passion.  St. Moses remained in the monastery for ten years, peacefully falling asleep in the Lord on July 26, 1043.  Hs relics are fragrant and remain till today in the caves of the monastery. A portion of his relics are enshrined at the St. Nicholas Monastery in Mukachevo in the Carpathians.   People throughout the world turn to him, asking for his prayers before the Lord in the struggle with sexual sin.  He is remembered each year on July 26  (Gregorian calendar) or August 8  (Julian calendar).

God gave you the grace to preserve from unclean passions
everyone who with faith and love have recourse to your help.
So in thanksgiving, we sing to the Lord:  Alleluia!  Who has given you
to us as a speedy and merciful healer.

-from the Akathist to St. Moses

A Model of Chastity

St. Moses the Carpathian is an example for us in the struggle to preserve chastity in a society flooded with sexual images and sexual temptation.  But the world we face today is little different from that of the Roman society in which the early Christians lived.  The New Testament epistles describe the lifestyle of these early converts to the Faith prior to coming to know Jesus as their Lord:

….sexual immorality, indecency, lust, evil passions, and greed… At one time you yourselves used to live according to such desires, when your life was dominated by them.  (Colossians 3)

St. Peter and St. Paul challenge their disciples to lead lives at odds with the prevailing culture:  to be different and even to be considered “odd”.

Shun immorality. Every other sin which a man commits is outside the body; but the immoral man sins against his own body. Do you not know that your body is a temple of the Holy Spirit within you, which you have from God? You are not your own; you were bought with a price. So glorify God in your body. (1 Corinthians 6:18-20)

These pagan Romans flocked to Jesus and the Christian Faith and embraced a new way of living and of expressing their sexuality.  What motivated them to do this?  One possible reason is revealed in this story.  Years ago when I was engaged in pastoral training in New York City I met a young man who shared his story with me.  I can’t remember his name but I will call him Gary.  Gary was raised in a small, remote town in Alabama and every Sunday his grandmother “dragged me to the Baptist Church”.  Gary said he hated going to church, hated “all the rules” and couldn’t wait to grow up and get out of town.  Gary graduated high school and did just that:  he moved to New York City and in his words “I ditched Jesus as fast as I could”.  Gary said he threw himself into a life he had only dreamt about:  parties, drinking, drugs, sex without inhibitions.  Gary admitted “It was fun, I was living a great life” but after a few years he described feeling increasingly “empty and depressed” and wondering “is this all that life is about?”  Where did Gary eventually wind up?    He sought out a Baptist Church in New York City and embraced again the Jesus and the Faith that he had earlier jettisoned.  Like Gary, I think many of these Romans were also looking  for something more and found attractive the Christian teachings on the dignity and holiness of the human body.

And so for us in 21st century America, we too must struggle to be different:  to struggle against adultery, fornication (sex outside of marriage), homosexuality, cohabitation before marriage, sexual abuse, pornography.  Whether our inclinations are heterosexual or homosexual we are all called to chastity and purity, remembering the motivation that St. Paul offers:    Do you not know that your body is a temple of the Holy Spirit within you, which you have from God? You are not your own; you were bought with a price. So glorify God in your body.  When we fail, weak, mortal people that we are, God’s mercy and forgiveness are ever present when we turn to Him.  By the prayers of our Holy Father Moses of the Carpathians, we may continue in our struggle for chastity and purity!