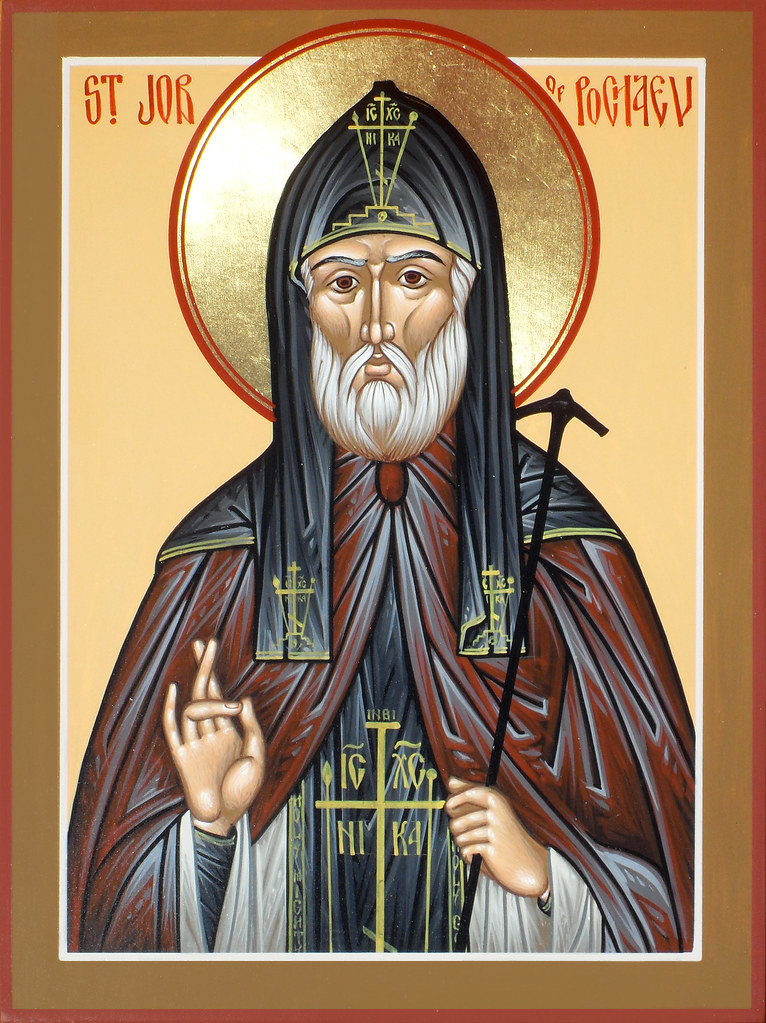 A beloved saint of Carpatho-Russians, Ukrainians, Byelorussians and Russians is the Venerable Job, Abbot and Wonderworker of Pochaev.  St. Job is remembered as a defender of the Orthodox Faith, an ascetic and spiritual father, miracle worker, and abbot of the great monastery of Pochaev located today in western Ukraine.

St. Job was born in 1551 with the name Ivan Zhelezo (which means “iron”) to a family of pious Orthodox Christians.  At the tender age of ten, he left his parents and asked to be received into the monastery of the Transfiguration in the village of Pidhora, in the Carpathian Mountains.    Two years later, at the age of 12 he was tonsured as a monk and given the name “Job”.  The monk Job proved himself worthy of the monastic tonsure by his exemplary way of life and when he reached the age of 31 he was ordained as a priest.  Father Job came to be known and trusted by a local nobleman who was a defender of the Orthodox Faith, Prince Constantine Ostrogsky.  After repeated requests by the prince, Father Job was transferred to the monastery of the Exaltation of the Holy Cross located on the Prince’s estate, outside the town of Dubno.  Here Father Job served as the abbot of the monastery and along with caring for the spiritual growth of the brothers he devoted his time to the writing and publishing of theological books, sermons and instructions.  Father Job especially devoted his writing to combat Protestant heresies which were circulating throughout the region.  It was with Father Job’s blessing that Prince Constantine published the first printed version of the Slavic Bible known today by scholars as the Ostrog Bible.

During Father Job’s twenty years as the abbot of the Holy Cross Monastery, a number of Orthodox bishops and priests signed the infamous Union of Brest in which they abandoned the Orthodox Faith for union Rome creating a new Uniate or Greek Catholic church which was neither Roman Catholic nor Orthodox.  The lands of what is today western Ukraine were at the time part of the Roman Catholic Polish-Lithuanian Commonwealth.  The rulers of these lands desired to further control their subjects by ensuring their allegiance to their own Catholic Faith.  Further, many Orthodox clergy accepted this union with Rome because as Catholic clergy they would receive economic and social benefits and a higher standard of living.   In this struggle to preserve the Orthodox Faith, Father Job lived up to his family name:  Zhelezo:  “iron” by his stance against those who sought to betray the Orthodox Faith.  Father Job stood as an iron wall against a flood of apostasy which was described by Metropolitan Isaiah who in 1632 wrote this report to the Moscow Patriarch:

There are no pious princes, noble dignitaries have disappeared, everyone has left from Eastern Orthodoxy to the West, and one can hardly find a man among the poor and inglorious who have remained pious in the Orthodox Faith. 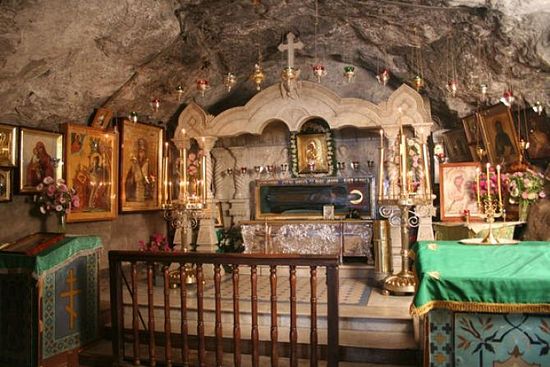 As Father Job’s reputation and fame grew throughout the region, he increasingly sought quiet and solitude to devote to his salvation and to avoid the praise and honor of people.  He knew well the warning of the Lord:  Woe to you when everyone speaks well of you, for that is how their ancestors treated the false prophets.  (Luke 6:26)   Father Job was attracted by the Monastery of Pochaev which was then in a remote wilderness; the monks lived alone in caves while working out their salvation and then joining together for the Divine Liturgy in the Church of the Dormition of the Theotokos.    Father Job moved to the Pochaev Monastery around1600 and despite his attempt and to remain unknown and unnoticed the brothers of Pochaev elected Job as their abbot.

The Pochaev Monastery had been established years earlier at a place hallowed by an appearance of the Blessed Virgin Theotokos.  The Theotokos appeared to the monks in the shape of a column of fire and left the imprint of her foot in the rock she stood upon.  From this rock flowed a stream of water with the miraculous power of healing.  By the time Father Job arrived the Pochaev Monastery was also becoming well known as the home of a miraculous Icon of the Theotokos now known as the “Mother of God of Pochaev”.  The icon was given to a local, pious Orthodox woman – Anna Goiskaya - in 1559 by Metropolitan Neophytus who brought it with him from Constantinople.  After several miraculous healings associated with the icon, Goiskaya felt the icon no longer belonged in a private home but in a place where it could be venerated by all the people.

Father Job,  by his example and holiness of life attracted other brothers to the monastery and he worked endlessly for their welfare and the material stability of the brotherhood.  His days were given to manual labor and his nights to prayer as was described by one witness – Dositheus:

For by day he exercised himself with constant handiwork, such as the planting and grafting of trees, the tending of orchards, the building of ponds….and afterwards, at night, the favorite of God would give himself over wholly unto the Lord.

Father Job especially loved to retreat to a remote cave, away from people and distractions to pray and be alone with the Lord.  Dositheus records;

And if this cave of stone had a mouth, it would be able to tell us how, sometimes for three days at a time, sometimes for an entire week, shut up there alone, nurtured only by the tears which flowed from his pure heart, he prayed there for the good estate of the world which lies in evil.

While Father Job engaged in work and prayer he had to fight off attacks on the brotherhood by roving bands of Tartars who succeeded in plundering the monastery and beheading one of the monks.   The brothers then faced attacks by the Protestant grandson of Anna Goiskaya who seized the icon of the Mother of God of Pochaev and attempted to remove the monks and steal their land.

Just as he strengthened the Orthodox people from Protestant errors while the abbot at Dubno, Father Job continued these efforts in Pochaev.   The Orthodox people of the region faced pressure to join the Catholic Church through the newly established Uniate Church as one by one bishops and priests succumbed to the Unia.   At this time the printing press at the Pochaev Monastery was the only one in the region and Father Job used it to produce prayerbooks, sermons, and books of Orthodox teaching to strengthen the faithful against Catholic proselytizing.

On October 21,1651 Job received a revelation from God that in seven days he would depart from this life.   And on October 28, after having served the Divine Liturgy, without any illness he peacefully fell asleep in the Lord at the age of 100.  He was glorified as a saint in 1659 and his incorrupt relics are venerated to this day at the Pochaev Monastery in the stone cave in which he spent so much time in prayer.  Tens of thousands of people flock to the monastery each year on October 28 – his feastday -  and also on August 28 to honor the Blessed Theotokos on the feast of her Dormition, to venerate the icon of the Mother of God of Pochaev and to venerate his sacred relics which continue to be a source of miracles for the faithful.

Having acquired the patience of your Forefather,
and having resembled the Baptist in his abstinence,
you shared the divine zeal of both,
and were found worthy to receive their names.
You were a fearless preacher of the True Faith;
in this way you brought a multitude of monks to Christ.
You strengthened all people in Orthodoxy,
Job, our venerable Father,
pray that our souls may be saved.