A Serbian Saint For Carpatho-Russia: Metropolitan Dositheos of Zagreb

Remember your leaders, those who spoke the word of God to you.
Consider the outcome of their lives and imitate their faith.
(Hebrews 13:7) 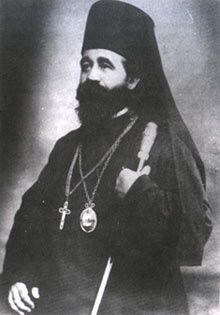 Well-documented and well-known among Orthodox Christians in America are the stories of the countless bishops, priest and lay people martyred by Communists throughout the countries of Eastern Europe. Less known are the lives of the thousands of Serbian Orthodox Christians, estimated at nearly one million, martyred for their Faith during World War II. Notable among these stories is the life of a Serbian bishop who played an important role in the resurrection of the Orthodox Faith in Carpatho-Russia in the early part of the 20th century.

The life of Metropolitan Dositheus (Vasich) of Zagreb, and the story of his suffering for the Orthodox Faith is closely tied with the political and religious history of the Balkan nation formerly known as Yugoslavia. The nation of Yugoslavia was formed in the aftermath of World War I from the states of Serbia, Croatia, Slovenia, and Montenegro. This new nation attempted to unite in a single state all of the South Slavic peoples who possessed a diverse ethnic identity as well as religious diversity of Roman Catholicism, Islam, and Orthodox Christianity. This fragile unity exploded in 1941 when the Nazi Germans invaded Yugoslavia and split up the nation. An independent state of Croatia was established as a Nazi satellite ruled by a fascist militia known as the Ustashi. It has been well documented that from 1941-1945 the Croatian Ustashi regime murdered approximately 500,000 people, 250,000 were expelled and another 200,000 forced to convert to Roman Catholicism. The target of their persecutions: Jews but primarily Serbian Orthodox Christians. Among the victims of their terror, the Metropolitan of Zagreb, Croatia -- Dositheus.

St. Doseitheus was born in Belgrade Serbia in 1887, was educated at the seminary in Belgrade later graduating from the theological academy in Kiev. He also studied theology and philosophy in Berlin and Leipzig, Germany. Following graduation he was tonsured a monk, ordained deacon, and assigned as a teacher in the St. Sava Seminary in Belgrade in 1907. In 1909 he continued his studies at the Sorbonne in Paris and in 1913 he was consecrated Bishop of Nish.

In December, 1920 the Holy Synod of Bishops of the Orthodox Church of Serbia decided to send Bishop Dositheus to Czechoslovakia at the repeated requests of Orthodox Christians who had renounced the Greek Catholic Uniate Church for their ancestral Orthodox Faith. He arrived in Carpatho-Russia in August, 1921 and visited the village of Iza, one of the centers of the Orthodox revival, a town forever sanctified by the presence of two Carpatho-Russian saints: St. Alexis Kabaluk, known as the Apostle of Carpatho-Russia and St. Job Kundria. He presided over a meeting at which delegates from sixty Orthodox parishes discussed the organization of a new Carpatho-Russian Orthodox Diocese. A constitution for the new church was written and Bishop Dositheus went to Prague to have it approved by the Second Council of the Orthodox Church of Czechoslovakia on August 28-29, 1921. On September 25 of that year he was a co-consecrator of the new bishop, Gorazd Pavlik who was executed by the Nazis in 1942 and has since been glorified by the church as a saint and new martyr. While Bishop Dositheus soon returned to Serbia he never forgot his former flock. He returned in 1935 to take part in the consecration of the Cathedral of Sts. Cyril and Methodius in Prague and in 1939 for the consecration of the new Orthodox cathedral in Olomouc.

In 1931, Bishop Dositheus was appointed the first bishop of the newly established Zagreb Diocese. Here in the capital city of Croatia, Orthodox Christians were a minority in a predominately Roman Catholic nation. The new bishop arrived in his diocese among Catholics who were not welcoming of an Orthodox bishop especially since his missionary work was well known in leading Carpatho-Russians out of the Greek Catholic Church. Bishop Dositheus became the target of insults in the streets and stones were thrown into his windows at night. When told that he should contact the police he responded that it was inappropriate for a bishop to do this. The bishop told a friend "When they swear at me or spit at me, I simply raise my hand and bless them". Bishop Dositheus took seriously the words of the Beatitudes: Blessed are the meek, for they shall inherit the earth.

With the invasion by the Nazi Germans and the establishment of the Croatian Ustashi regime, Serbian Orthodox schools and orphanages were closed. The Ustashi were firmly pro-Catholic and anti-Serb and anti-Orthodox. In their view Croatia was a Catholic nation with a Catholic heritage and identity. All Orthodox Christians were forced to wear an arm band with the letter "P" for pravoslavnyj – Orthodox, similar to the star forced upon the Jews. Those who refused to convert to Catholicism were executed. The Catholic Archbishop Aloysius Stepinac initially warmly welcomed the new regime and blessed them. Stepinac is currently a candidate for sainthood in the Catholic Church for his rescuing of Jews threatened by the Nazis and his persecution by the Communists. Modern historians are divided on his role in the persecution of the Orthodox. At best, he was passive as Orthodox clergy and people were massacred or forced to convert to Catholicism.

Upon the ascent of the Ustashi, Bishop Dositheus was immediately arrested. Ill and lying in bed, half-dressed, he was taken into the street to face a Catholic mob. He was led through the streets, beaten and mocked by the crowd. On his arrival at a hospital for treatment, he was nearly unconscious. His mistreatment at the hospital continued where he was the object of scorn and derision by the Catholic nuns who staffed the hospital. Seriously ill, he was taken by two Nazi SS guards to a prison in Belgrade, Serbia where he was found dressed in rags, his body covered with bruises. At the request of the Serbian government, Bishop Dositheus was released from the hospital and placed in the Monastery of the Entrance of the Theotokos into the Temple. The nuns of the monastery cared for him until he died from his injuries on January 13, 1945. He was buried in the church yard of the monastery and was glorified as a confessor of the Faith by the Holy Synod of Bishops of the Serbian Church in May, 2000. He is commemorated on the day of his falling asleep in the Lord and on June 28, the commemoration of the New Martyrs of Serbia.

Blessed are you, when men revile you and persecute you, and say all manner of evil against you falsely for My sake. Rejoice and be exceedingly glad, for great is your reward in heaven.

O Teacher of Orthodoxy and Instructor of virtues and purity,
O Luminary of the whole world,
O God-inspired Ornament of Hierarchs,
O Most-wise Dositheus,
You have enlightened all by your teaching;
O spiritual flute, entreat Christ the Lord to save our souls.