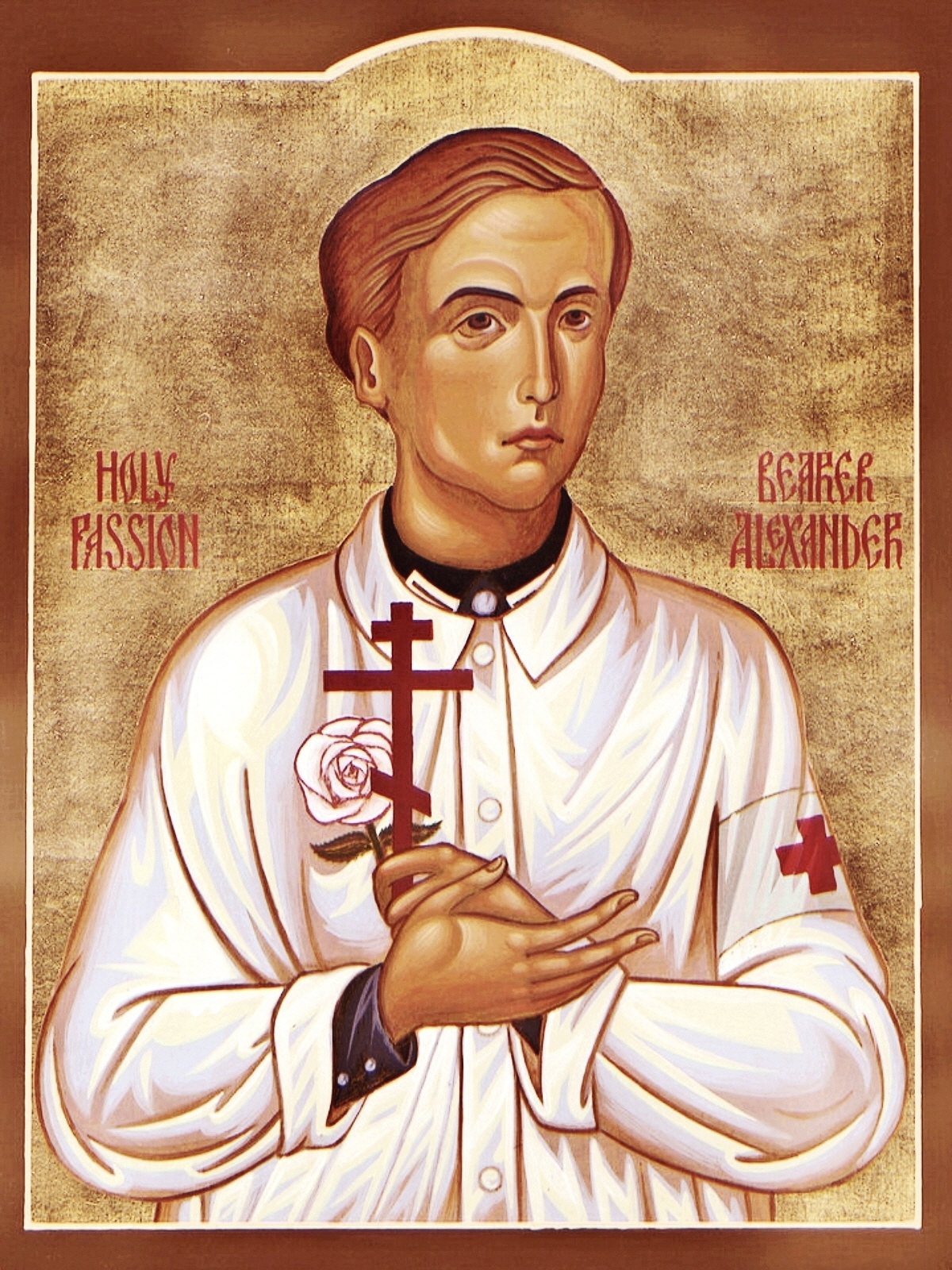 On February 4 – 5, 2012 the Diocese of Berlin and Germany of the Russian Orthodox Church Outside of Russia canonized as a saint, the New Martyr Alexander Schmorell. St. Alexander was a member of an underground Nazi resistance group known as the White Rose which used passive, nonviolent resistance to Adolph Hitler and his Nazi party against their violence and extermination of Jews and other minorities. The group was discovered and all were executed by beheading, including St. Alexander at the age of 25 on July 13, 1943.

The new saint was the grandson of an Orthodox priest and with his parents he fled Russia in 1921 in order to escape from the Communists. Alexander was raised in the Orthodox Faith and maintained his faith throughout his life, attending services and reading Scripture. In the summer of 1942, St. Alexander and two of his friend were drafted to serve as combat medics in the Nazi army on the eastern front. While on their military service they witnessed many of the atrocities of the Nazis including the mass execution of Poles, Russians and Jews in shooting pits. Upon their return from duty, Alexander became a key part of the clandestine White Rose which began publishing and distributing a series of six leaflets advocating opposition to the Nazis. St. Alexander himself wrote the second and third leaflets, and the second leaflet contains the only known public opposition by any German resistance organization against the Holocaust:

We wish to cite the fact that, since the conquest of Poland, 300,000 Jews have been murdered in that country in a bestial manner. Here we see the most terrible crime committed against the dignity of man, a crime that has no counterpart in human history.... No crime of this dimension has ever been perpetrated against human beings.

The leaflets caused an immediate sensation on the campus of the University of Munich and the Gestapo began an intensive investigation to discover their origin. With the danger to their lives mounting daily, the White Rose, never numbering more than 51 with a core group of 6, continued their work for eight months. Any public opposition to the Nazis meant certain death; simply possessing one of their leaflets was also life threatening.

One of the members of their group – Sophia Scholl – was caught distributing leaflets on the university campus on February 18, was arrested with her brother Hans and another member- Christoph Probst and all three were tried and executed on February 22. The Gestapo began a massive manhunt for Alexander Schmorell and other members of the group. After a failed escape to Switzerland he was arrested on February 19, tried on April 19 and sentenced to death. As he awaited his fate, his poignant letters to his father and stepmother survive:

I can't report anything new to you. Myself, I am healthy and in a good frame of mind. I've recently read something in a very good and meaningful book, that seems to be very fitting for you all: "The greater the tragedy of life, the stronger one's faith must be; the more it seems that we are forsaken, the more confidently we must commend our souls into the hands of God the Father". And the Abbot Theodore von Byzant writes: "Therefore, I have thanked God for my misfortunes, and bowed myself completely to the unfathomable judgments of His Providence, that in His beneficial manner, He has already know, from the time in which the foundations of the world were laid the time and place of death of every person." This is pretty much the same as what I have already written you. It would make me very happy, if you would think the same way, it would take away a lot of sadness and pain for you.

But I'm not dead yet – and so pray and don't give up hope.

My most heartfelt greetings,

His final letter to his family, written shortly before his execution:

My dear father and mother,

Now it shall be none other than this, and by the will of God, today I shall have my earthly life come to a close in order to go into another, which will never end and in which all of us will again meet. Let this future meeting be your comfort and your hope. Unfortunately, this blow will be harder for you than for me, because I go in the certainty, that in my deep conviction, I have served the truth. All of this leaves me with a calm conscience, despite how near the hour of death is... In just a few hours I will be in a better life, by my mother, and I will not forget you; I will ask God to grant you solace and peace. And I will wait for you! One thing, above all, let me leave this on your hearts:

St. Alexander's body was buried behind Stadelheim Prison in the cemetery at Perlacher Forst. After World War II the American forces built a base adjacent to the cemetery. Following theclosing of the base in the 1990s the buildings, including a church, were turned over to theGerman government. At the same time a Russian Orthodox congregation was searching for a new building and purchased this church. As a result, the relics of St. Alexander rest across the street from the Orthodox Church in Munich.

The witness of the Holy New Martyr Alexander is an inspiration for all OrthodoxChristians, especially our young adults, in remaining firm against the tide of godlessness that is sweeping across our nation. While no one risks death for standing against the evils in American society, our young people face ridicule and derision when they say No! to abortion, No! to homosexuality and No! to living together in sin before marriage. As the Nazis defiledthe sanctity of human life by their racism and murder, so American society also devalues and degrades the holiness of sexuality and the human body. St. Alexander and his companions said No! to the accepted evils of German society of their day and paid for this witness with theirlives!

Holy Passion-bearer Alexander of Munich, pray to God for us!

The courageous story of the members of the White Rose is widely known throughout Germany. A memorial in their honor has been erected on the grounds of the University of Munich where the first of the group was arrested, streets and parks are named after their members. A 2005 documentary film titled Sophie Scholl focused on the three initial members of the group who were arrested and executed: Sophie Scholl, Hans Scholl, Christoph Probst. Nominated for an Academy Award for Best Foreign Language Film it used actual excerpts from the court trial in telling the story of their courageous stand against Nazi terror.

Today a light adorns our glorious city, having within it your holy relics,O Holy Martyr Alexander; for which sake pray to Christ God that He deliver us from all tribulations, for gathered together in love we celebrate your radiant memory, imitating your bravery, standing against the godless powers and enemies.

From your mother you inherited the love of Christ, and through the love of your caregiver you were nourished in the fear of God, O all-glorious one, to Whom you gave yourself, O all-honorable Alexander, and you now diligently pray with the angels. Beseech on behalf of all who honor your memory a forgiveness of their sins.