Elder Amphilochios of Patmos is Canonized 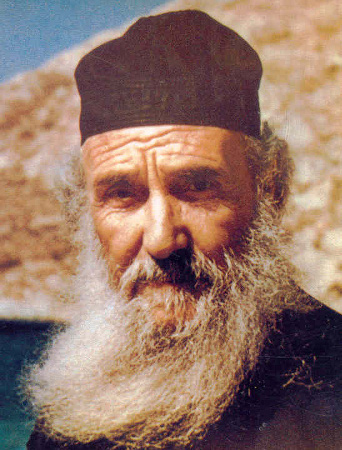 Remember your leaders, those who spoke to you the word of God; consider the outcome of their life, and imitate their faith.  (Hebrews 13:7)

The Holy Synod of Bishops of the Ecumenical Patriarchate of Constantinople, meeting on August 29, 2018, added to the calendar of saints:   Elder Amphilochios (Makris) of the island of Patmos.  This island is famed as the place where the Apostle John the Theologian, after undergoing persecution, was sent into exile and had visions which led to writing of the Book of Revelation (Apocalypse):

I John, your brother, who share with you in Jesus the tribulation and the kingdom and the patient endurance, was on the island called Patmos on account of the word of God and the testimony of Jesus. I was in the Spirit on the Lord’s day, and I heard behind me a loud voice like a trumpet saying, “Write what you see in a book and send it to the seven churches…”  (Revelation 1:9-11)

The future Saint Amphilochios was born on the island of Patmos in 1889.   He was named Athanasios in baptism and was raised in large family of pious, country people.  Even as a small child he was known to be devout and would strictly observe the church fasts.  At the age of 17 he decided to take seriously the words of the Lord:

“If any man would come after me, let him deny himself and take up his cross daily and follow me.  (Luke 9:23)

So in March, 1906 he entered the Monastery of St. John the Theologian on his native island of Patmos.  This monastery is renowned as the place which preserves the cave in which the Apostle John received the Apocalypse.  Tonsured as a monk with the name Amphilochios, he especially used the weapon of fasting to conquer his sinful passions:   ten mouthfuls of food at each meal and only a few olives on fast days.  In 1911 the abbot of the Patmos monastery sent him to the monasteries of Mount Athos in order to learn the trade of wood carving to help support the monastery.  In 1913 Fr. Amphilochios was to be ordained a deacon by the bishop on the island of Kos.  Believing that he was unworthy and inadequate to receive this rank, he said to his traveling companion:

My brother, I am unworthy of such an honor.  I would rather go from place to place begging alms, with a clean conscience, than unworthily take on the honor of ordination. Go on in peace, I am going to head toward the Holy Land.

He eventually returned to Patmos where he accepted ordination as a deacon in 1919 and then to the holy priesthood.  With the ability to perform the Holy Mysteries, he was sent by his monastery to nearby islands to hear confessions and celebrate the Divine Liturgy.  Desiring to deepen the spiritual lives of the people of his native island, he began the construction of a women’s monastery dedicated to the Annunciation of the Theotokos on the western side of Patmos, which today is populated by over 40 nuns.  In 1935 Fr. Amphilochios was elected by the brotherhood of the Patmos monastery as their abbot which proved to be short lived.  That same year the Italian army occupied Patmos and nearby islands and forced Fr. Amphilochios into exile on the mainland of Greece due to his popularity and influence over the populace.  His returned from exile in 1939 but the Italian occupation was soon replaced by the Germans.   Exhausted from his time of exile, the Elder did not resume duties as the abbot, instead devoting his energies to the Monastery of the Annunciation.  When one of his nuns grew concerned for his health he responded:  “I am a servant of the Church and cannot rest”.  While the Elder was devoted to the monastic life, he recognized that people need not only spiritual but also material help so in 1947 he assisted a group of nuns on the island of Rhodes to establish and orphanage along with a home for pregnant women.

On Pascha, 1968, Fr. Amphilochios received a premonition of his impending death and was given two years to prepare himself.  Tearful at the thought of being separated from his flock he begged the Lord to allow him more time to guide and prepare his spiritual children.  Shortly before he died he told one of them that the Theotokos and the Apostle John the Theologian had appeared to him and said the Lord would not fulfill his request to remain beyond what had been promised.  And so, after a short illness, the Elder peacefully surrendered his soul to the Lord on April 16, 1970.

Metropolitan Kallistos (Ware) of England knew the elder on Patmos and quotes the advice the Elder gave him as a newly-ordained priest prior to his return to England:

Teachings of the Elder 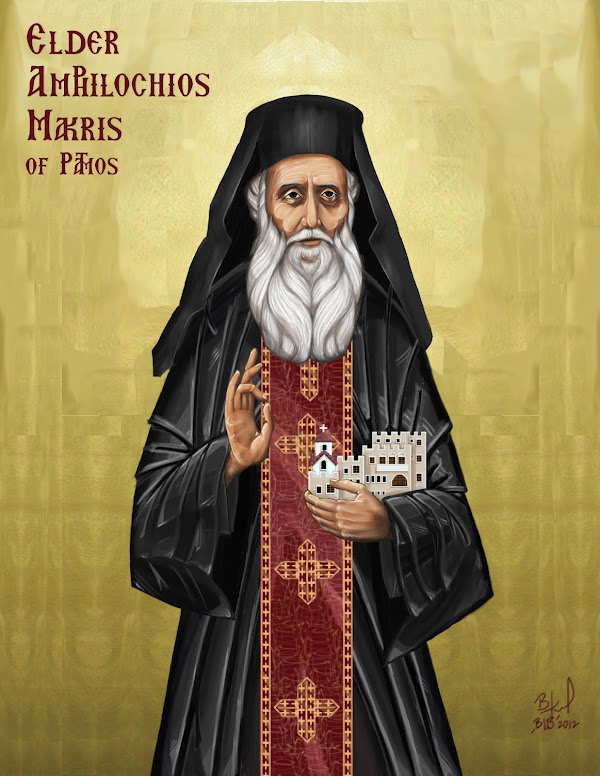 For God's grace to come during the Liturgy you must be concentrated and untroubled.

Do not neglect evening prayer. Pray with eagerness like those who are going to a feast. They are awake and feel joy alone. Thus, since you are going to speak with your Bridegroom, do not listen when the Tempter tells you various things in order to hinder you, because you know there issomeone who cares for you.

Do not allow your soul's enemy to wage war against you. He appears in sheep's clothing, supposedly wanting your soul's benefit.

When man partakes of Holy Communion he receives power and is enlightened, his horizons widen, and he feels joy. Each person experiences something different, analogous to his disposition and the flame of his soul. One person feels joy and rest, another peace, another a spirit of devotion and another an inexpressible sympathy towards all things. Personally I have often felt tired, but after Holy Communion I felt myself completely renewed.

We must have Love, even if they do us the greatest harm, we must love them. We will be able to enter Paradise only with love.

Christ is near us even if we don't see Him. Sometimes, from his great love, He gives us a slap too.

Brother, forget your sins: our Christ has blotted them out from the Book of Life.

The more a person loves God, the more he loves other people. He loves them with holiness, respect and refinement, as images of God.