Remember your leaders, those who spoke to you the word of God; consider the outcome of their life and imitate their faith.  (Hebrews 13:7)

On December 2, 1998 the remarkable earthly life of one of the most outstanding Orthodox spiritual elders of the 20th century:  Elder Cleopa of Romania ended.  While over 10,000 people gathered for his funeral at the Sihastria Monastery in the Carpathian Mountains of northeastern Romania, the news of his death traveled around the world.  Even such secular outlets as The New York Times   carried a notice of his death and the even the local newspaper in far-away Salinas, Kansas carried the story:  Romanian Holy Man Dies.

Father Cleopa was born Constantine Ilie and from a very young age was uninterested in matters of this world but those of heaven.  At the age of 17 he entered the Monastery of Sihastria together with his brothers George and Vasile.  There he was assigned the obedience (daily task) of caring for the monastery’s flock of sheep.  Brother Constantine’s university was the Carpathian Mountains where he spent a total of 15 years caring for sheep.  There the holy elder spent his time alone with the sheep, in the company of only one or two other monks.  He prayed constantly and read from the Holy Scriptures daily along with the writings of the Fathers which he borrowed from the monastery and took with him up to the sheep pasture.  He usually came down from the mountains on Saturdays to attend the evening Vigil and the Divine Liturgy in the monastery church.  In 1937, after six years in the monastic life, Brother Constantine was tonsured into the monastic life and given the name “Cleopa”.

In 1942 the abbot of Sihastria Monastery – Father Ioanichie was now 82 years old and realized that he was growing incapable of guiding the needs of the monastery and the spiritual direction of the monks.  He proposed that Father Cleopa be named acting abbot in his place.  The entire community of monks was surprised by the abbot’s choice since he was only 30 years old, had no seminary training an

d spent most of his years alone with the sheep in the mountains.  Yet Father Ioanichie knew other things; Father Cleopa read voraciously and had learned more in his private reading among the sheep than many seminaries could have taught him.  He also knew that Father Cleopa was capable, rational and spiritually advanced.  So several monks set off for the mountains where they found Father Cleopa surrounded by his sheep.  They greeted him with these words:

Father Cleopa, the time has come, as in the days of the Prophet David, for you to leave those who are lambing now and to shepherd the rational flock.  We all want you.  Father Ioanichie, who raised all of us, has summoned you because he is not able to carry his burden any longer.

Father Cleopa refused their request:  “I am only thirty years old...look for someone else because I do not know how to guide souls.  I am a sinner”.  Despite his objections, Father Cleopa accepted the office after receiving this note from his spiritual father, Father Paisius:

My beloved son, I am a sinner, but my advice is that it is not your place to say “yes” or “no”!  Don’t be glad that they are choosing you as abbot, and don’t be upset when they take that position from you.  Be obedient to the will of the elder abbot and the community and leave yourself totally to the will of God.

After only a few years in service to the brothers of the monastery as abbot, a new chapter in the elder’s life began in 1948.    In May of that year, Father Cleopa had just finished celebrating the Divine Liturgy when officials of the dreaded Securitate (Romanian Secret Police) arrived and took him away in a car.  He was kept locked in a basement cell for five days with no questions asked, no explanation given, and no food or water.  After his release he was advised by those who loved him to go into hiding for a time, either in the mountains or someplace where he could not be found.  Father Cleopa fled to the mountains where he made a small wooden shack at the side of a cliff that was more of a cave than a shack.  There the elder spent his days and nights in prayer, serving the Divine Liturgy on a nearby tree stump.  Father often referred to his years in caring for the sheep as his university years in which he spent the most time reading and learning with his mind.  But the school that formed him into one of the leading Orthodox spiritual fathers of the 20th century was his years living in total seclusion, hiding from the Communist authorities in the forests and mountains.  After a year in seclusion, the elder returned to his monastery only to be forced into hiding once again from 1952 to 1954.  In 1952 he was again arrested by the Securitate, beaten and thrown into a basement where he was tortured with blinding lights.  A third period of persecution was followed by a third period of seclusion in 1962-1964.  The elder always considered these years of solitude as the most blessed times of his life.  There, in the solitude of nature, he met God in his heart through unceasing prayer.  His daily practice was to spend ten to twelve hours each day and night in prayer.  He would read the Morning Prayers, the Akathist Hymn to the Savior as well as other akathists along with the book of Psalms.  Later in the day he would read Vespers, Compline, the Paraclesis to the Theotokos and the Evening Prayers.  The rest of the time was spent in labor and in repeating the Jesus Prayer.

With his return after living as a hermit, the fame of Father Cleopa as a spiritual father began to spread throughout Romania.  He was called to oversee the spiritual renewal of several other monasteries.  He became the spiritual father of bishops and metropolitans and was blessed to be visited by His Holiness, our Patriarch Bartholomew of Constantinople accompanied by His Holiness, Patriarch Teocist of Romania.

Father Cleopa fell asleep in the Lord in 1998, having predicted the time of his death.  A few weeks before his death he told one of the monks:  “My days are numbered and can be counted on your fingers!  Soon you will be singing ‘Eternal memory’ for me.  Please remember me in your prayer”.  Father Roman Braga, of blessed memory, the spiritual father of the Dormition Monastery in Michigan summed up the life of the holy elder with these words:

It is impossible to separate Father Cleopa from the Carpathian forests and mountains.  He was a spiritual father to the simple village people of the mountains and was imbued with their character just as he was united with the very setting in which he lived, with the birds and wild animals.  Since I was a disciple and admirer of this great Carpathian spiritual father, God granted me to visit his cell.  It contained a writing table, a very clean and well-made bed that he rarely touched during his life, and a sheepskin vest on a hanger.  This was the room in which he knelt, read, prayed, and slept.

How was it possible that a simple monk, with little or no education, who spent most of his time first with sheep as a shepherd and then many years living alone in the wilderness, became one of the most venerated spiritual elders of modern times?  The secret is really no secret at all:  it is the same truth we find in many of the lives of the Saints.  Father Cleopa was marinated in prayer and the Holy Scriptures.  To marinate meat or any food means to allow it to sit in the liquid in order for it to penetrate and flood the meat with the flavor and essence of the liquid.  While we in our American world are marinated in television, the internet and all kinds of worldly diversions, Father Cleopa’s spirit was filled with the Spirit of God, so much so that all of Romanian society was affected and even the New York Times took notice.  This is why it is so vitally important for all of us to spend daily time in prayer and reading Holy Scripture.  This is why your priest encourages you to attend the Divine Liturgy every week along with Vespers and other services.  While we value intelligence, education, college degrees, cars, clothes, homes...the life of the Elder shows us the value of seeking the one thing needful:  to sit as the Lord’s feet as did Mary the sister of Lazarus.

Some Teachings of Father Cleopa 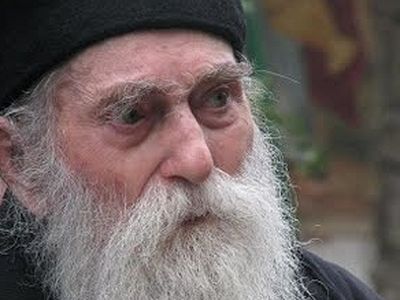 One of the foremost spiritual obligations that we have, both as monastics and as lay people, is to confess our sins.  We must first recognize that we all sin against God, some more than others, but no one is without sin.

The benefit of frequent confession is that sin does not have time to put down roots in us.  If the devil sees that you confess often, that you repent, he will say:  “It is useless for me to work on him since he is constantly going to the priest and confessing, receiving absolution, and thus, I gain nothing.  It is better for me to go to those who are lazy spiritually, who don’t care about their salvation, who confess rarely, if at all, because those do not work against me as this one does!”

I advise people to always do the Morning and Evening Prayers, as well as the prayers for meals.  During the day while people are at work, I tell them to say the Jesus Prayer silently and other short prayers as well.  In addition to that, I tell them that they need to go to services at church, and that they should know the Lord’s Prayer, the Creed, and Psalm 50 by heart.  I tell them to read the Holy Scripture and other spiritually beneficial books.

The number 666 in the Book of Revelation symbolizes the three horrible passions that will reign over the world in the last days.  These passions are:  uncontrollable fleshly desires for fornication, adultery, and drunkenness as has never before been seen.  Careless conjectures which lead to adherence to heresies, all kinds of confusions, spiritual sicknesses, witchcraft, despair and suicides.  The third 6 refers to unjustified anger, or hatred among mankind:  wars, revolutions, all sorts of violent crimes, arguments, unrest between Christians, between parents and children, as it is written in the Holy Gospel.

There is nothing that is more helpful for us and more beloved to God than the sacrifice of the Divine Liturgy because it is the action of the Savior and the resurrection of mankind as He is united to us.  The Divine Liturgy far surpasses every other prayer or praise, and it is thus fitting that we give proper attention to this divine work.  Through the sacrifice of the Divine Liturgy, we become partakers of the divine Mysteries, which we receive as often as we are deemed worthy to approach.  Those who are also reposed in the true faith also “partake invisibly” of Christ at this sacrifice through their commemoration at the holy altar for the forgiveness of their sins.  Those who faithfully participate in the Divine Liturgy receive many great blessings.  Christ Himself, together with the holy angels and all the saints, is present at this most holy service.