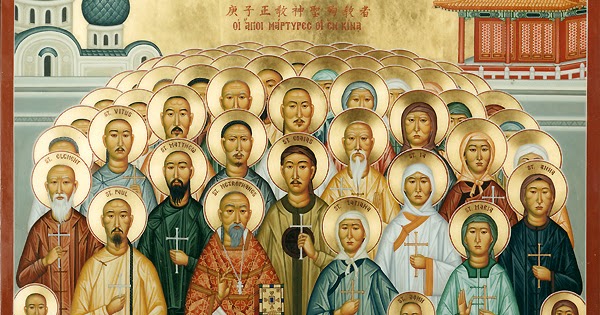 It was June 10, 1900, dozens of Chinese Orthodox Christians had fled for their lives and hid in the home of their priest, Father Mitrophan Tsi-Chung. (who was ordained by St. Nicholas of Japan) A rebellion had broken out in China known as the Boxer Rebellion, an uprising against foreign influence which targeted all foreigners and Chinese converts to Christianity. Armed bands roamed the streets searching for foreigners to kill with the tacit approval of the imperial government. The group surrounded the home of Father Mitrophan and while some Orthodox Christians managed to escape, most of them, including the priest, were stabbed or burned alive. His body was found in his yard under a date tree. Father Mitrophan’s family shared in his witness for Christ: his son Isaiah was beheaded, his wife Matushka Tatiana initially managed to escape but was captured and beheaded on June 12 along with nineteen other Christians. The priest’s eight year old son John was brutally mutilated: his ears, nose and toes were cut off but he survived this ghastly attack. He was seen the next day begging for water. Passersby mocked him and called him a follower of devils. When asked if he was in pain he replied “It does not hurt to suffer for Christ”. The Boxers returned for him and finished him off.

An Orthodox Christian woman named Ia Wang, the head teacher at the Orthodox Mission School, was also taken prisoner on June 10 and was stabbed, beaten and buried alive. A sympathetic neighbor picked up her tortured body and took her to his home where he nursed her back to health. The Boxers, when they discovered she was still alive, returned and tortured her to death while she had the name of Christ on her lips. St. Ia the Teacher is sometimes called St. Ia the Twice-martyred.

Archimandrite Innocent, then head of the Orthodox Chinese Mission, wrote of their martyrdom in the following words:

The day of reckoning for most Orthodox Chinese was June 11, 1900. On the eve of that day leaflets were posted in the streets, calling for the massacre of the Christians and threatening anyone who would dare to shelter them with certain death. In the middle of the night gangs of Boxers with flaming torches spread over Beijing, attacking Christian houses, seizing Christians and forcing them to deny Christ. Some, terrified by torture and death, indeed renounced the Faith in exchange for life and burned incense before idols. Others, undaunted, confessed Christ. Their fate was horrible. They were ripped open, beheaded, burned alive. After that day search for Christians and killings continued: Christian houses were destroyed, people brought out of town to where Boxers&#39; temples were set up,interrogated and burned at the stake.

In all 222 Orthodox Christians received the crown of martyrdom, including Paul Wang, Clement Kui Lin, Matthew Chai Tsuang, Anna Chui and others known by name only to God. Churches were burned including the extensive Orthodox mission library, Orthodox schools and homes destroyed and the printing press smashed. Hundreds of Roman Catholic and Protestant Christians also shared in the martyrdom of the Orthodox. The Boxer Rebellion only ended when troops from eight nations, including the United States, entered China to defend their citizens and end the violence.

The bodies of Father Mitrophan and the other Holy Chinese Martyrs were placed under the altar of a new church dedicated to their memory which was built in 1906. A cross was erected on the site of their martyrdom and the feast of the Chinese martyrs was first commemorated on June 10, 1903.

The Orthodox Faith arrived with missionaries to China in 1685 and the first chapel was built in Bejing. The mission experienced little growth initially but saw its greatest blossoming in the late 19th century. More churches were built, the liturgical services and spiritual literature were translated into Chinese and native Chinese were taught the Gospel message of Christ. Despite the violence of 1900, the Orthodox Church of China emerged out of the ashes to a period of new growth. By 1902 there were 32 Orthodox Churches along with schools and orphanages and approximately 6,000 faithful. The first bishop for China was consecrated in Russia, Bishop Innocent. By 1916 there were three monasteries, 17 schools and
numerous printing houses and workshops. Following the Russian Revolution of 1917, the Orthodox population in China soared as thousands of Russians fled to China to escape the Communists. Notably, among this group, was St. John Maximovitch who became the Bishop of Shanghai and later fell asleep inthe Lord as bishop of San Francisco. With the Communists assuming control in China in 1949, the Orthodox Church of Russia granted autonomy (limited independence) to the Orthodox Church of China. By this time, the Chinese Church had two Chinese bishops and an estimated 20,000 faithful. All of this progress was destroyed again with the Cultural Revolution in China which began in 1966. Once again
Orthodox Churches were confiscated and destroyed, Orthodox Christians were martyred. The Church of the Annunciation became a circus, the cathedral of St. John Maximovitch became a stock exchange. The last Chinese bishop, Vasily Shuan died in 1962 and has never been replaced. The Orthodox Church of China had effectively ceased to exist.

As China has moved to modernize its society and embrace a limited form of capitalism, new hope has arisen for the rebirth of Orthodoxy in China. A new Chinese prayerbook and catechism has been published. Chinese Orthodox students have been allowed to enroll in seminary in Russia. In 1996 the Ecumenical Patriarch established the Orthodox Diocese of Hong Kong and Southeast Asia to promote missionary work in China and throughout that region. Now shepherded by Metropolitan Nektarios (Tsilis), this was the first formal effort to bring Orthodoxy back to China. The Chinese government does not yet extend official recognition to the Orthodox Church due to its concern for foreign influence. In fact, the government has set up a rival Catholic Church – the Patriotic Chinese Association – which is independent and not recognized by the Pope of Rome. For now, there are only three active parish communities in mainland China: the Church of the Dormition on the grounds of the Russian embassy in Bejing, a community in Shanghai at the Russian consulate and the Church of the Intercession in Harbin. There is somewhat more freedom in Hong Kong where two Orthodox parishes operate freely. What became of the holy relics of those 222 martyrs buried under the church in Bejing? A recent Russian visitor to Bejing wrote this:

Our Embassy in Beijing, one of the largest in the world, is renown for exquisite beauty of its landscapes. It is embraced all around by a quiet, crystal-clear canal with willows along its banks and a large lake in the middle... My favorite place was on the island with the playground. But neither Russian children who played here, nor their parents, knew why this island was a remarkable place. In 1901-1916 the church of All Holy Orthodox Martyrs was built on this spot. The crypt under the altar gave rest to the bodies of the
Chinese Christians killed by the Boxers. The church was surrounded by the cemetery. All that is gone...

The sacred relics of these courageous men and women have not yet been found. But with the new, limited openness of the Chinese government there is hope for a continued revival of the Orthodox Faith in China.

For more information on the Orthodox Church of China: www.orthodox.cn

In recent times you imitated the martyrs of former times,
in your victorious contests, O blessed Saints,
for you competed valiantly for Christ.
Watering his holy Church of the great land of China with your blood,
you have received a crown from the Lord’s hand.
As you are standing near Him in the heights,
pray for us who honor your martyrdom.