On July 11, 1883, in the rectory of the Greek Catholic village church in Ortutova, Saris, in Austro-Hungary, His Eminence, Metropolitan Orestes Chornock was born to Reverend Father John Chornock and his wife, Pani Mary.  Orestes completed his elementary schooling in Bardijov, then graduated to the Royal Gymnasium in Presov where he studied for eight years and graduated with honors.  Young Orestes entered the theological academy of Presov, completing his studies, becoming a candidate for Holy Orders.

He was united in marriage to Yolanda Molchany on July 17, 1906, a union that was to last for thirty-one years, broken by Pani Yolanda's death in 1937.  Seminarian Orestes was ordained to the Priesthood on August 28, 1906 on the Holyday of the Dormition of the Virgin Mary in the Cathedral of Presov by the Most Reverend Bishop Dr. John Valyi.  The newly-ordained priest was assigned the village church in Osturna, County of Spis, where he labored for two years.  On November 17, 1908, the young Father Chornock came to America, along with other priests to minister to the needs of the hundreds of thousands of Carpatho-Russians who emigrated to the United States.  Father Chornock served parishes in Burnside-Chicago, Illinois; Cleveland, Ohio; and Duquesne, Pennsylvania.  On March 25, 1911, he became pastor of St. John's Church in Bridgeport, Connecticut where he labored for some 45 years.  The parish was one of the largest in the country.

By 1936 there was turmoil in the Greek Catholic Church after repeated pleas for recall of the decrees of celibacy and latinization which had been imposed on parishes.  After no response, parishes met in Pittsburgh, Pennsylvania at a Church Council.  On February 6, 1936, those parishes selected the Reverend Orestes P. Chornock as administrator for the establishment of a new diocese.  The following year, on November 23, 1937, hundreds of delegates and priests gathered again in Pittsburgh and, by unanimous vote, elected Father Chornock as Bishop-designate. 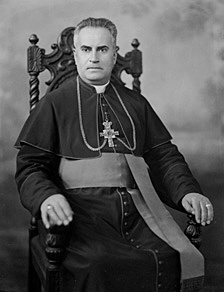 On September 18, 1938, Father Chornock was elected and consecrated Bishop by the Holy and Sacred Synod of the Ecumenical Patriarchate of Constantinople.  Three Metropolitans: Germanos, Constantine and Dorotheos were the consecrating bishops.  Bishop Orestes was consecrated with title to the See of Agathonikeia, which means "Good Victory".  The new Bishop would single-handedly steer the new Diocese on its course through 1966 when he would receive an auxiliary bishop in the person of the Most Rev. Bishop John R. Martin to assist him.  Shortly before that, in 1965, Bishop Orestes was elevated to the rank of Metropolitan by the Ecumenical Patriarch.  His Eminence passed to life eternal on February 17, 1977, with his funeral on the first day of Lent in St. John the Baptist Church in Bridgeport, Connecticut. 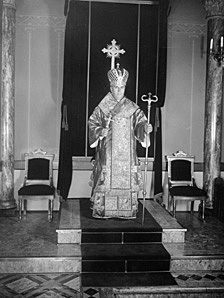 Read More about the Life of His Eminence, Metropolitan Orestes