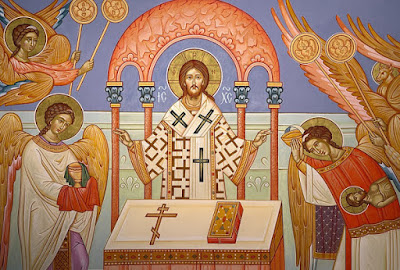 does not behave rudely, does not seek its own, is not provoked, thinks no evil;

does not rejoice in iniquity, but rejoices in the truth;

For we know in part and we prophesy in part.

For now we see in a mirror, dimly, but then face to face. Now I know in part, but then I shall know just as I also am known.

And now abide faith, hope, love, these three; but the greatest of these is love.

Pursue love, and desire spiritual gifts, but especially that you may prophesy.

For he who speaks in a tongue does not speak to men but to God, for no one understands him; however, in the spirit he speaks mysteries.

But he who prophesies speaks edification and exhortation and comfort to men.

He who speaks in a tongue edifies himself, but he who prophesies edifies the church.

I wish you all spoke with tongues, but even more that you prophesied; for he who prophesies is greater than he who speaks with tongues, unless indeed he interprets, that the church may receive edification.

"For the kingdom of heaven is like a landowner who went out early in the morning to hire laborers for his vineyard.

"Now when he had agreed with the laborers for a denarius a day, he sent them into his vineyard.

"And he went out about the third hour and saw others standing idle in the marketplace,

"and said to them, 'You also go into the vineyard, and whatever is right I will give you.' And they went.

"Again he went out about the sixth and the ninth hour, and did likewise.

"And about the eleventh hour he went out and found others standing idle, and said to them, 'Why have you been standing here idle all day?'

"They said to him, 'Because no one hired us.' He said to them, 'You also go into the vineyard, and whatever is right you will receive.'

"So when evening had come, the owner of the vineyard said to his steward, 'Call the laborers and give them their wages, beginning with the last to the first.'

"And when those came who were hired about the eleventh hour, they each received a denarius.

"But when the first came, they supposed that they would receive more; and they likewise received each a denarius.

"And when they had received it, they murmured against the landowner,

"saying, 'These last men have worked only one hour, and you made them equal to us who have borne the burden and the heat of the day.'

"But he answered one of them and said, 'Friend, I am doing you no wrong. Did you not agree with me for a denarius?

'Take what is yours and go your way. I wish to give to this last man the same as to you.

'Is it not lawful for me to do what I wish with my own things? Or is your eye evil because I am good?'

"So the last will be first, and the first last. For many are called, but few chosen."