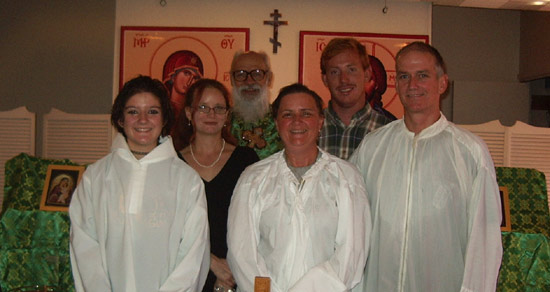 In July, 2005, with the blessing of His Eminence, Metrolitan Nicholas of Amissos, the former ruling Bishop of the American Carpatho-Russian Orthodox Diocese of the USA, first steps were taken to look into the feasibility of establishing an Orthodox parish in Lakeland, Florida, where no Orthodox presence had yet been established. Subsequent to some tentative contacts and placement of an ad in the Lakeland Ledger, the local newspaper, on August 14, 2005, St. Nectarios Orthodox Mission parish opened its doors and the first Divine Liturgy was celebrated in the home of its pastor, Fr. Nicholas Wyborski. In September 2005, the parish was incorporated under the laws of the State of Florida as a non-profit corporation with the purpose of meeting the needs of the community through Orthodox worship and teaching of the Holy Gospel of our Lord and Savior Jesus Christ.

The Mission began with six people with a vision to establish an Orthodox presence in Lakeland, Florida which had no other Orthodox parish. After holding Services in a nursing home room, the pastor's home, and sharing the use of an Episcopal Church, St. Nectarios parish gained permission from the Roman Catholic Diocese of Orlando to use the Chapel on the campus of Santa Fe, a local Catholic High School which became the temporary home of St. Nectarios Mission until 2010.

The Chapel, however only had room for 25 worshippers and, because the parish had now grown to over 50 members it was time to find a more suitable worship space. Due to the generosity of many benefactors, both local and from throughout the country, the parish raised enough funds to put a down payment on 13 acres of land at 405 Marcum Road in north Lakeland to be used to establish a permanent Orthodox worship facility. The parish

worked diligently with a local engineering firm and general contractor to develop site plans, obtain necessary permits, surveys and satisfy other governmental requirements which finally resulted in the placement and renovation of a modular building into what has now become our new church home.

However, in spite of the generous donations from throughout the Diocese, the Mission's building fund is still in need of an additional $125,000 before we can move to the next phase which will entail the erection of a proper Orthodox Church on the property (the present facility would then be converted into classrooms and social hall).

The Mission has won many friends in the area and is well on its way to becoming a shining beacon of Orthodoxy in the Lakeland area.

St. Nectarios Mission  is in the need of the following items:

If you would like to assist the mission through donating gently used or new liturgical items, or through a monetary gift,  please contact:

Raise money for St. Nectarios Orthodox Church, Lakeland, FL by searching the Internet with
GoodSearch.com (powered by Yahoo), or shopping online with GoodShop.com