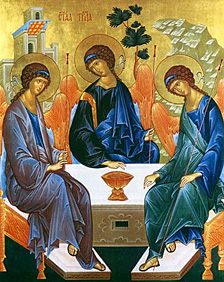 Thus far, the trip to Saint John the Compassionate Mission in Toronto, Canada, has been a truly edifying experience.  From being a part of services in the Chapel, to absorbing a wealth of knowledge from enlightening lectures, to engaging in service (diakonia) at the mission, and finally to just becoming acclimated with a new location, this has really been an awesome and exciting sojourn.

Starting around 10:00 AM, we began our fifth day at Saint John’s Mission.  This particular day commenced with diakonia, specifically in preparing for the meal set to begin at 11:00 AM.  Now normally, when the people sit down to eat they are served restaurant style, with volunteers bringing the food to them.  The meal for today was actually served buffet style, with the people getting in line to receive their food.   My point in mentioning this is that such a change did not affect the atmosphere of mission camaraderie.  People still sat at the same round tables, and still engaged in the same lively conversations as always.  One of the best aspects of the mission, in my opinion, is the time people spend together around the dinner table, enjoying one another’s company and sharing stories that would probably would not have been told if it were not for the existence of Saint John’s.

After serving for a while, it was time to break for the 6th Hour, roughly around noon.  Interestingly, a good portion of the service was led by a few Seminarians.  Moreover, it is always so important to have some form of worship in the middle of the day, so as to keep focus on the true missionary examples of Christ and the Saints.

We then returned to the hall to finish serving lunch.  After all the guests were taken care of, it was time to grab some food and sit down with those who remained.  This was my favorite time of the day.  Not only did it provide an opportunity to meet new people, but moreover it gave me a chance to engage in conversation with people I never would have ever encountered if were not for the mission.  Consequently, I have learned something invaluable here at Saint John the Compassionate.  The poor are our master, and actually through serving, helping, and working with them, we gain some of the wisdom they have to offer, by their words or by their deeds.  I have honestly never before looked at life in such a way.  Now, I have finally begun to understand.

The day culminated with a Panachida at 5:00 PM and Vespers immediately following.  The services were led by Father Luke, a welcoming and jovial monk.  The Seminarians led the responses for the Panachida, while the church choir and the Seminarians split the singing for Vespers.  The services were beautiful, and the day at the mission ended in the best way possible, in worship to God.

Ultimately, the experience at Saint John the Compassionate Mission has led me to look at my life and my responsibilities, not only as an Orthodox Christian but as a human being in general, in a whole new light.   The commission of Christ to “love one another, just as I have loved you” and to deny yourself and take up your cross has been given a whole new perspective.  I am glad that I have come here, and I know in my heart that what is happening at Saint John’s is beneficial not only to the poor of Toronto, but even more so to those working in service to them.