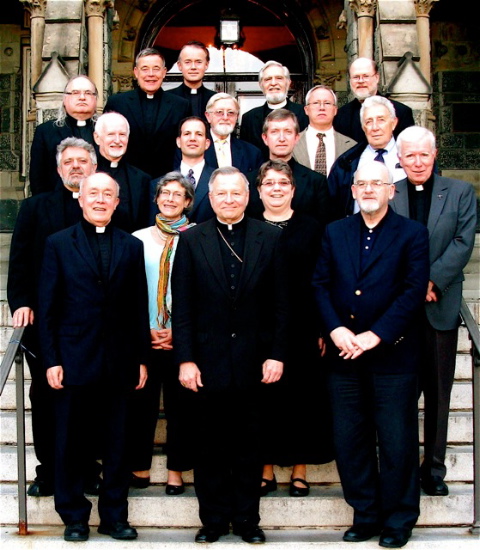 WASHINGTON—Representatives of the Orthodox and Catholic Churches have issued two new documents outlining immediate steps they can take to overcome their thousand-year separation. The North American Orthodox-Catholic Theological Consultation finalized these agreed statements when it met at Georgetown University in Washington, September 30 to October 2.  The Consultation is co-chaired by Archbishop Gregory M. Aymond of New Orleans and Metropolitan Maximos of Pittsburgh.

The first statement, “Steps Towards a Reunited Church: A Sketch of an Orthodox-Catholic Vision for the Future,” is an unprecedented effort to begin to visualize the shape of a reunited Catholic and Orthodox Church that would result from the reestablishment of full communion. The text acknowledges that the role of the Bishop of Rome in the Church is a central point of disagreement and outlines the history of this divergence between East and West. It goes on to summarize the many elements of the Christian faith and ecclesial life that the two churches share, and emphasizes the urgency of overcoming our divisions.

“Clearly, this cannot be achieved without new, better harmonized structures of leadership on both sides: new conceptions of both synodality and primacy in the universal Church, new approaches to the  way primacy and authority are exercised in both our communions,” the document says.

The agreed statement lists some of the features that would characterize a fully reunited Church and then focuses on the role the papacy would play within it. This role would need to be carefully defined, “both in continuity with the ancient structural principles of Christianity and in response to the need for a unified Christian message in the world of today.” The document then suggests several aspects of the Pope’s ministry in a reunited Church that could be both faithful to Catholic teaching and acceptable to the Orthodox. The document also lists several “preparatory steps” that could be taken even now as a prelude to the future unity of the churches, such as shared prayer and social ministry, and enumerates several questions and problems that remain outstanding.

The text concludes that “The challenge and the invitation to Orthodox and Catholic Christians … is now to see Christ authentically present in each other, and to find in those structures of leadership that have shaped our communities through the centuries a force to move us beyond disunity, mistrust, and competition, towards that oneness in his Body, that obedience to his Spirit, which will reveal us as his disciples before the world.”The complete text of this statement is available here:

The second statement, “Celebrating Easter/Pascha Together,” is a re-affirmation of the Consultation’s 1998 document, “A Common Response to the Aleppo Statement on the Date of Easter/Pascha.” In this new text, the members emphasize the importance of a united witness to the Resurrection of Christ, which lies at the very center of the Christian faith, and the scandal caused by the inability to celebrate this feast day consistently on the same date.

The Consultation joins many other expressions of support for a recent proposal that would re-calculate the date of Easter for all Christians based strictly on the teaching of the First Council of Nicaea (325), which determined that Easter be celebrated on the first Sunday following the first full moon after the Spring Equinox. Determining the Equinox from the Jerusalem meridian and using the most accurate scientific instruments and astronomical data available would require a change for both traditions, but would also represent greater faithfulness to the teaching of Nicaea.

“For the mission of the Church,” the document states, “a common celebration would support the unity we already share and help to build it further in the future.” The full text is available here

This 79th session of the Consultation was hosted by the Office of the President of Georgetown University, which made the historic Riggs Library available for the meeting.  The members were the guests of Fr. John P. Langan, SJ, Rector of the Georgetown Jesuit Community for dinner on September 30, and Dr. John J. DeGioia, the President of the University, hosted a dinner for the Consultation and several members of the faculty and staff in the Philodemic Room on Friday evening October 1.

Since its establishment in 1965, the North American Consultation has now issued 25 agreed statements on various topics. All these texts are now available on the USCCB website at www.usccb.org/seia/orthodox_index.shtml and the Standing Conference of the Canonical Orthodox Bishops in the Americas (SCOBA) website at www.scoba.us/resources/orthodox-catholic.html.