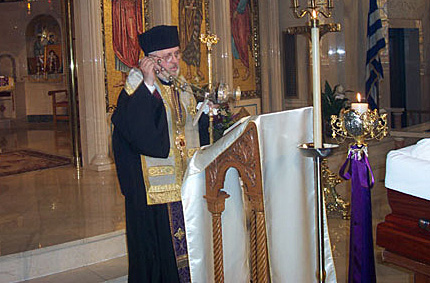 JOHNSTOWN, PA - [Diocesan Chancery] -- With profound sadness the Diocesan Chancery announces that Sally Ellis, the wife of Deacon Charles Ellis and the mother of Rev. Fathers George and Michael Ellis, peacefully reposed in the Lord on Wednesday March 16, 2022 with her family by her side.

JOHNSTOWN, PA - [Diocesan Chancery] -- With profound sadness the Diocesan Chancery announces that Audrey Rumbold, the mother of Pani Yvonne Lysack, reposed in the Lord on Monday, March 14, 2022 after a brief illness.

Audrey was born in Ramsgate, Kent, England. As a young child, she was evacuated several times during WWII and never forgot the pain of being "abandoned" by her parents with only a name tag around her neck and of lining up so that reluctant host families could take their pick of children. She always understood, however, that her parents had made the wisest choice to keep her and her younger sister safe. After the war, as a young woman, Audrey trained as a florist. In the early years of their marriage, Audrey and Dave immigrated to Canada so that Dave could work on the famed Avro Arrow project, and after the latter was halted, Dave joined the Royal Canadian Air Force. Read more...

Pani Mary was born in Wood, PA on Nov. 15, 1927 to Wasco and Pauline (Maksinchak) Mykut. In addition to her parents, she was preceded in Blessed Repose by her husband, The Very Reverend Protopresbyter Charles William Panchisin, infant son Michael, and siblings John, Sam, Mike, Emelia, Nick, Pete, Minnie Mykut and Anne Carpenter.

Pani Mary is survived by her children Mark, Paula, Matthew and John (Anna Katsoolias) Panchisin, two grandsons Luke and Charles Panchisin and her siblings Rosalie Mykut and Steve Mykut. She is also survived by numerous nieces and nephews fondly referring to her as "Aunt Mary". Read more...

Funeral arrangements are as follows:

Born July 17,1936 in Scranton, PA to the late Nicholas and Susan (Chuvan) Polanichka.Proto. Michael entered the Diocesan Seminary of Christ the Savior in Johnstown, PA in September 1956 and graduated in June 1960.

On June 11, 1960 he married the former Eleanor Jean Hazuda in Nesquehoning, PA and they just celebrated their 61st Wedding anniversary in June 2021. His beloved wife, Pani Eleanor, who was his caregiver for the past 3 years passed away suddenly on November 21, 2021. Read more...