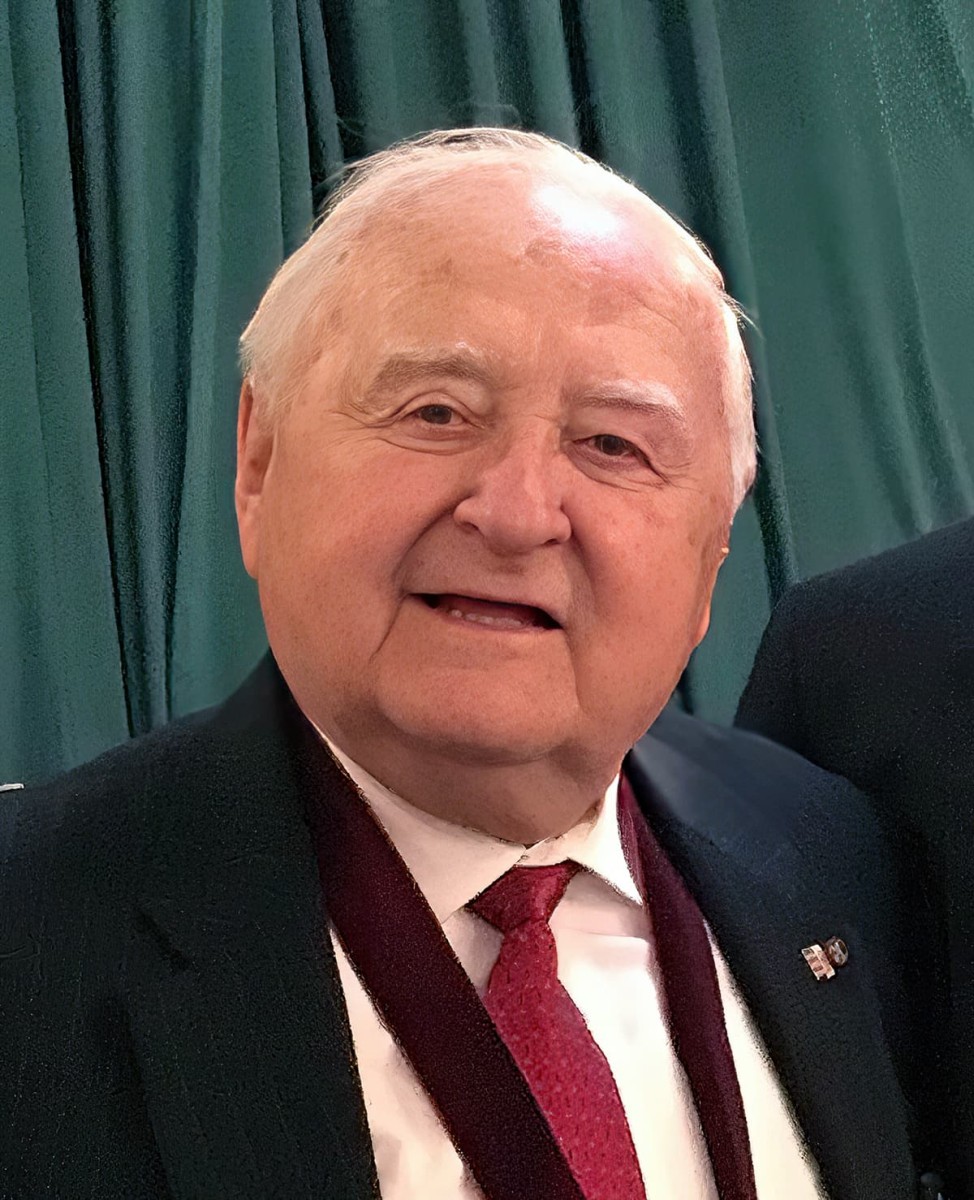 Michael Kundrat, ‘Mike’, almost 95 years of age, reposed in the Lord on December 31, 2022. He was born to Michael and Helena (nee Gajdos) Ivanco-Kundrat in Ambridge, PA on February 5, 1928. The family relocated to Hamilton, Ontario, Canada until 1932 when they were then deported and returned to Czechoslovakia, settling in Michael’s parents native village Vilagy (now Svetlice), Zemplin County, Slovakia. During WWII, the family was separated; Michael and his father were taken as Prisoners of War under the Nazi Occupation of Czechoslovakia. Eventually the family reunited and fled to Donetsk and Odessa, Ukraine where they lived before resettling in Milotice, (Bruntal District), Moravia. In 1947, alone at the age of 19, Michael returned to America aboard the Queen Mary and settled in Binghamton, NY. He was employed by Endicott-Johnson Corp. and attended Binghamton Central High School. In 1951 he was inducted into the US Army where he served in Germany and continued his education. He was honorably discharged as a non-commissioned officer. He then joined IBM where he worked for 27 years until his retirement in 1984 as an Engineer. During his life Michael always had an entrepreneurial spirit and formed Kundrat Printing Company with his wife. During his retirement, he partnered with Edward Suer and together they formed Carpathian Development Corporation, Johnson City, NY. This real estate firm developed ‘Carpathian Hill’ which includes both residential and commercial properties. For over 75 years Michael was an active member of Saint Michael’s Carpatho-Rusyn Orthodox Church, served as Vice President and Member of the Church Board. He served as President of the ACRY Organization and was a member of the Choir, Men’s Club, School Guild, Drama Guild, and was ‘Co-Pirohi King’ with his best friend, the late Very Rev. Monsignor Stephen Dutko. Mike was often called upon to be Starosta (master of ceremonies) at many weddings over the years.

Throughout his life Mike never forgot his roots and was dedicated to assisting the economically and ethnically oppressed Carpatho-Rusyn people. Some of his philanthropic efforts included raising funds to rebuild the war damaged Protection of the Mother of God Church in Vilagy (Svetlice) Slovakia; coordinated the donation of 14 (40’container) shipments of medical supplies and equipment, worth tens of millions of dollars, from the U.S. to the Uzhorod Regional Medical Center in Ukraine for which he was awarded an honorary doctorate degree Doctor Honoris Causa by Uzhorod National University. Michael was appointed as Primary Liaison from the American Carpatho-Rusyn Orthodox Greek-Catholic Diocese to the Orthodox Dioceses in Slovakia and Užhorod, Ukraine.

For 20 years, Mike organized the funding of the Saint Nicholas Children's Home (Orphanage) in Medzilaborce, Slovakia providing countless orphans with a better life. In recognition of his charitable works, Mike was bestowed the title of Offikon Archon Orphanotrophos, by the Patriarch of Constantinople. As an Archon of the Order of Saint Andrew, Mike traveled to Constantinople to join His All Holiness Ecumenical Patriarch Bartholomew, who received Pope Benedict XVI. All of Michael’s humanitarian efforts were recognized when he received the Jefferson Award from the American Institute for Public Service. This prestigious award, created by Jacqueline Kennedy-Onassis, recognized Michael’s dedication to helping those less fortunate. For decades Mike was active in assisting Carpatho-Rusyn and other immigrants in their assimilation into American society. Michael cherished his American citizenship but also stressed the importance of acknowledging and understanding one’s ethnic background and traditions. Mike believed that the freedoms afforded to Americans should never be taken for granted.

Michael is survived by his loving wife of almost 67 years, Dolores (nee Moschak) Kundrat and devoted children: Michael (& Barbara) Kundrat, Joseph Kundrat, and Nadine (& Michael) Korchak. He was Dido (Grandfather) to his six beloved grandchildren: Michael, Kristianna, Nicholas Kundrat; and Maria, Michael, Anna Korchak; and his great-granddaughter Clara. He was Ujko (Uncle) to Marta (& Dr. Nick) Seketa and Chudacik & Monahan Families; Elias & Ivan Radvak, and Honza & Irenka Danci all of Czech Republic. Michael was also Kresnej (Godfather) to several Godchildren in Europe and in the US including Patricia Gay, Jenny Lesko, and Annie Kelemecz. He is also survived by family in Canada, Czech Republic & Slovakia. Michael was predeceased by his parents; sisters Helena (& Eliaš) Radvak, Anna (& Simon) Danci; and nephews Boris Z. Chudacik, Dimitri & Vladimir Danci. The family would like to extend its sincere gratitude to his physicians and nurses for their compassionate care, especially Dr. Hisham Kashou.

Visitation took place on  Sunday, January 8th at St. Michael’s Orthodox Church and was  followed by a Parastas prayer service Very Rev. Protopresbyter James Dutko and guest clergy officiated at  the Divine Liturgy and Funeral Service on Monday, January 9th followed by burial will be in St. Michael’s Cemetery.

Donations in Michael’s memory may be made to St. Michael’s Orthodox Church.

Diocesan Clergy and faithful are kindly asked to remember the newly departed servant +Michael and the entire Kundrat family in their prayers.

May Almighty God Grant Rest Eternal and Blessed Repose to  His Newly Departed Servant +Michael and May His Memory Be Eternal!